Dan Savage Points Out the Hypocrisy in the Bible… So Young Journalists Walk Out on Him April 29, 2012 Hemant Mehta

Dan Savage, creator of the It Gets Better Project, gave a talk about anti-gay bullying at a conference for high school journalists a couple of weeks ago. The program listed the goal of the keynote this way: “Students will get ideas on how to cover the topic of bullying in their student media.”

Keep in mind it’s virtually impossible to talk about anti-gay bullying without mentioning the Bible. Those two things go hand-in-hand. Bullying happens all the time, but you don’t need to look much further than Christianity to account for the vitriol directed specifically at gay students.

Once a snippet of the video was uploaded on Friday (4 minutes of a 90 minute lecture), it was evident that students were walking out on him. Conservatives were, not surprisingly, all over it: 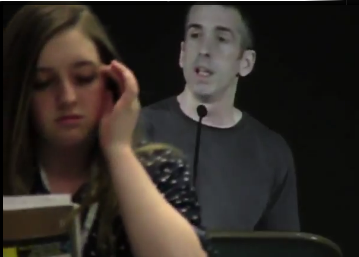 Their responses centered around a few things:

Dan Savage is so anti-Christian!

Look at those students walking out on him!

Listen to all those swear words!

Focus on the Family’s CitizenLink couldn’t believe Savage talked about the Bible at all… as if it’s a completely blameless book:

A 17-year-old from California who was attending with half a dozen other students from her high school yearbook staff, was one of several students to walk out in the middle of Savage’s speech.

“The first thing he told the audience was, ‘I hope you’re all using birth control!’ ” she recalled. Then “he said there are people using the Bible as an excuse for gay bullying, because it says in Leviticus and Romans that being gay is wrong. Right after that, he said we can ignore all the ‘B.S.’ in the Bible.

“I was thinking, ‘This is not going a good direction at all,’ Then he started going off about the Bible. He said somehow the Bible was pro-slavery. I’m really shy. I’m not really someone to, like, stir up anything. But all of a sudden I just blurted out, ‘That’s bull!’ ”

Umm… Dan Savage is right about the Bible being pro-slavery. Certainly, it’s not against it.

Let’s dissect this talk a bit more, though.

First, here’s the full transcript of the video (courtesy of Towleroad):

People are dying because people can’t clear this one last hurdle. They can’t get past this one last thing in the Bible about homosexuality.

Um, one other thing I wanna talk about is — [chuckles] — so, you can tell the Bible guys in the hall that they can come back now, because I’m done beating up the Bible. It’s funny, as someone who’s on the receiving end of beatings that are justified by the Bible, how pansy-assed some people react when you push back.

I apologize if I hurt anyone’s feelings. But. I have a right to defend myself. And to point out the hypocrisy of people who justify anti-gay bigotry by pointing to the Bible, and insisting we must live by the code of Leviticus on this one issue and no other.

Since I think Savage was mostly in the right with what he said, let me criticize him for a second. No matter the topic, I don’t know why he was compelled to use the words “bullshit” and “pansy-assed.” Right off the bat, he’s alienating the people who believe in the Bible (and, therefore, the people who need to hear this message the most). Plus, when you’re giving a talk about how gay people get treated like shit, don’t use a word like “pansy-assed” to describe the reactions of the kids walking out on you — it just makes you look like a bully yourself, even if you’re not. It would’ve also helped his case to point out that plenty of Christians support gay rights — they might rationalize or ignore what the Bible says, but they are on Savage’s side on this issue.

So did he go too far in talking about the Bible? Nope. If you’re a journalist covering this subject, you should know about the root cause of anti-gay bigotry: The Bible. I don’t know how anyone could give a speech like this without talking about religion.

Does anyone really think another speaker offering virtually the same content — but without the mockery and swearing — would have been perfectly well-received? I don’t. The moment you point out the hypocrisy in the Bible, people are bound to get upset. You’re hurting their brains with your honesty.

I’m actually surprised that those students walked out of the room. Even if you didn’t like what Savage was saying, isn’t that a story worth writing about?! You can’t cover a story if you ignore what your subject is saying, even if it goes against your personal beliefs.

The kids who walked out of that room weren’t “proud Christians.” They were bad journalists.