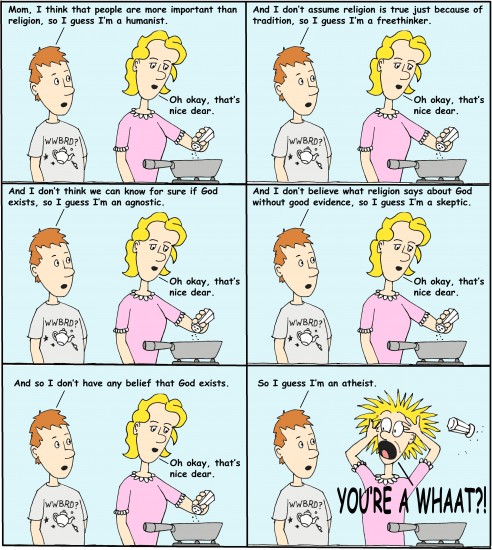 I’m 18 years old, and have been an atheist since I was about 13, although back then I certainly wasn’t the confident, unashamed non-believer that I am today. I am fortunate enough to have been raised in a very liberal and open-minded household; my parents are pro-gay marriage, pro-choice, pro-birth control, pro-tolerance, anti-war, the whole 9 yards.

During my childhood, however, my mother insisted I attend church (albeit a very open-minded non-denominational one, almost UU) along with her. She believes in God for personal reasons; whereas my father has never said but a few words regarding religion, and I believe his mother (my grandmother) was an atheist. Once I reached the age of 11 or 12, she stopped forcing my attendance; and in hindsight, I’m glad she did. It was about that age I started truly questioning things and began doubting religion. I shudder to think how I might have turned out if she had forced my participation in more religious activities…anyway, that is my family situation.

My mother has known my religious doubts for a long time, as we often had spirited discussions and debates about various aspects of faith. I was under the impression she knew I didn’t believe in God; I was wrong. I came home one day wearing an atheist t-shirt, and she was shocked (although she had seen it before; I suppose it didn’t register the first time). After the surprise wore off, she wasn’t angry, although she began admonishing me: “An ATHEIST? I mean, it’d be fine if you were just agnostic, but how can you be an ATHEIST? How do you have any hope?” My father, surprisingly, jumped in and seemed to also concur that he would rather me be agnostic. He said, referencing the word “freethinker” on my shirt: “Being a freethinker precludes being an atheist.”

My mother then started to write me off, saying to my girlfriend “Do you know why he thinks he’s an atheist? Because he hasn’t had any big traumas in his life. You’ll see…there isn’t a godless man on a battlefield…” She continued dismissing my atheism as something I only “think” I am; a “phase,” something childish that she reckons I’ll abandon at the first sign of trouble. I tried explaining to her that atheists have hope because they believe in their own potential, and work through their own issues, but to no avail. I left the subject for a while, and when I brought it back up the next day she continued saying “I can’t believe you think you’re an atheist…how can you have any hope? Why do you even bother getting up in the morning?” I countered with the fact that regardless of her belief in God, she doesn’t get up every morning simply because of that fact either. She ignored that, talking about how she “knows” she’s seen a dead pet in heaven (in a dream) and how she “knows” there’s a god.

There is no animosity between us, as she doesn’t associate with the darker side of religion; she simply believes in God, and I don’t. Regardless, I find myself deeply affected by her reaction; she will never agree with my atheism, but how can I get her to at least be at peace with it? Accept it, acknowledge it, and stop belittling it? Is there anything I can do, or will it simply take time?

Behold the awesome power of the “A” word. It can instantly paralyze a healthy, intelligent mind with fear, making it an impenetrable fortress incapable of receiving any new information. Some of the beliefs that many otherwise well-informed and open-minded people have about the word “atheist” are more absurd than their beliefs about gods. This is both tragic and comic because unlike evidence for gods, there’s an enormous supply of good evidence against their beliefs about atheists all around them. To be free of their fear, and the resultant anger, sadness, and damaged relationships, All they have to do is to talk to atheists. All they have to do is to be willing to listen. All they have to do is to stop being willfully deaf.

Your parents are demonstrating several of these irrational, reflex beliefs. They aren’t listening to how you use the word. Your voice is drowned out by their misconceptions roaring in their heads:

“How do you have any hope?” seems to mean she thinks the only thing that gives life hope is an afterlife. What a sad way to live. Your hope is for this life. You hope to find love, success, happiness, and a chance to be a part of something helpful, and as you said, you’re basing that on your own potential. She would probably be proud of that if she could hear you.

“Being a freethinker precludes being an atheist.” seems to mean that he thinks all atheists always adhere to a prescribed ideology and a set of dogmatic beliefs, such as “There is no God.” Again, that’s him listening to his own beliefs, and not hearing you.

“There isn’t a godless man on a battlefield.” seems to mean that she thinks the root cause of god belief is the fear of death. In a way she’s partially right, but she fails to see the irony in her statement. It could then be argued that if there were more godless men, there would be fewer battlefields. You have decided not to base your life on the fear of death because that amounts to a fear of life. Would she actually prefer you to be on a battlefield just so you might come to agree with her beliefs? Probably not, if she was able to hear you.

Trevor, if there’s no animosity between you, then step back from this conflict and ask yourself why you’re letting it so deeply affect you. I don’t think you should bother with trying to get your mother to be at peace with, to accept, acknowledge, and not belittle your atheism.

Your atheism is not you.

Don’t make your atheism an ideology or an identity. It’s just your lack of belief in gods. It’s only one small aspect of a person who is far more complex and encompassing than that. It’s only one result of how you think, how you observe the world, and how find your way through it. It’s only one outcome from practicing the rare virtue of skepticism.

Yes, I know how extremely frustrating it can be to not be listened to, and to be misunderstood by people who should be trying to understand you rather than change you. You can at least make sure you don’t do the same thing. Start by taking your focus off of trying to change their attitudes, and try to understand where those attitudes come from.

Your mother isn’t rejecting you, she’s recoiling from fear.

Generally I think people’s fear about atheists and atheism comes from three sources. One source is the many slanderous myths spread for millennia mainly by clerics to isolate their flock from contagion by unbelievers. The hatred and derision shuts up the doubters in their midst, and if they dare speak up anyway, they’re driven out.

The second source of fear is the threat to their own fragile faith when they meet an intelligent, sane, decent, and successful person who just isn’t convinced of their cherished belief. The scary implication is that if this person doesn’t buy it, then maybe they shouldn’t either.

I usually encourage people to talk, talk, talk to each other, but in this case, that mode isn’t working. Pounding on their soundproof stone citadel with rational arguments will probably not help much. You’ve already tried, and your efforts bounced off.

Since they cannot or will not hear you, try patiently coaxing them out of their dark fear fortress with what they can see rather than hear. Live in the sunlight of your optimism and self-confidence. Rather than talking, let them see your hopefulness in how you prepare for your short term and long term future. Let them see your courage as you rebound from setbacks. Let them see your joy as you celebrate a goal reached, a love found, and a life lived. Let them see the boy they love turning into the man they will admire.

Richard
You may send your questions for Richard to