Win a Copy of ¡Satiristas! by Paul Provenza and Dan Dion

Comedian Paul Provenza is the man behind the movie The Aristocrats and he’s the marquee name in the new Showtime series The Green Room with Paul Provenza.

I had a chance to hear him speak at The Amazing Meeting 8 about his book ¡Satiristas!: Comedians, Contrarians, Raconteurs & Vulgarians — a collection of interviews with comedians (specifically satirists) about their craft: what they do, why they do it, and what impact it may have. (The head shots in the book were taken by photographer Dan Dion.) 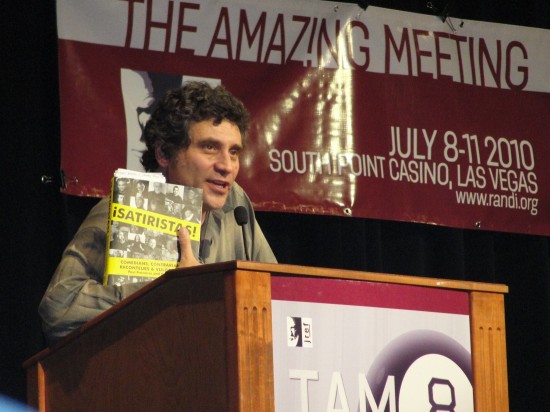 One of my favorite passages from the book is Provenza’s interview with John Lee and Vernon Chatman, the creators of the short-lived MTV2 sketch comedy series Wonder Showzen. In the excerpt below (reprinted with permission courtesy of It Books), they discuss the censors at MTV:

John Lee: They were always sensitive about religious stuff, too. That was kind of the biggest thing. We had a little puppet on the cross, and they said, “You can do God, you just can’t do Jesus. God is just an abstract idea, but Jesus? People will get offended.”

Vernon Chatman: MTV actually told us, “You can make fun of God because he doesn’t exist—

John Lee: —But you can’t make fun of Jesus, because he’s God’s son.”

Vernon Chatman: Someone actually said this to us. Please print that; I want it on the record. I’ll say it again so you get it right, and you promise you’ll print it. Someone at the network said: “You can make fun of God because he doesn’t exist, but you can’t make fun of Jesus, because he’s God’s son.”

Paul Provenza: I will print that you told me both times that the network said, “You can make fun of God because he doesn’t exist, but you can’t make fun of Jesus, because he’s God’s son.”

The folks at It Books have offered to give away a copy of the book to a reader here. Woo!

So let’s have some fun with it. All you have to do is provide an answer to the following:

In honor of Jimmy Kimmel‘s “This Week in Unnecessary Censorship” segment, bleep out the name of a book, TV show, or movie title to make it sound dirtier than it actually is.

[Bleeped] by an Angel

The winner will be chosen randomly.

If you’d like to be in the running for the free copy of the book, please write the word “Ninja” after your entry! Otherwise, I’ll assume you just wanted to comment for fun.

August 4, 2010
The Kids Got Phone Calls from God
Next Post