Update: The Secular Coalition for America’s Briefing with the Obama Administration

I’m back from the briefing. Here is some of what all went down.

After meeting in the Secular Coalition for America‘s offices in DC, we made the trek to the EEOB, where the policy briefing would take place: 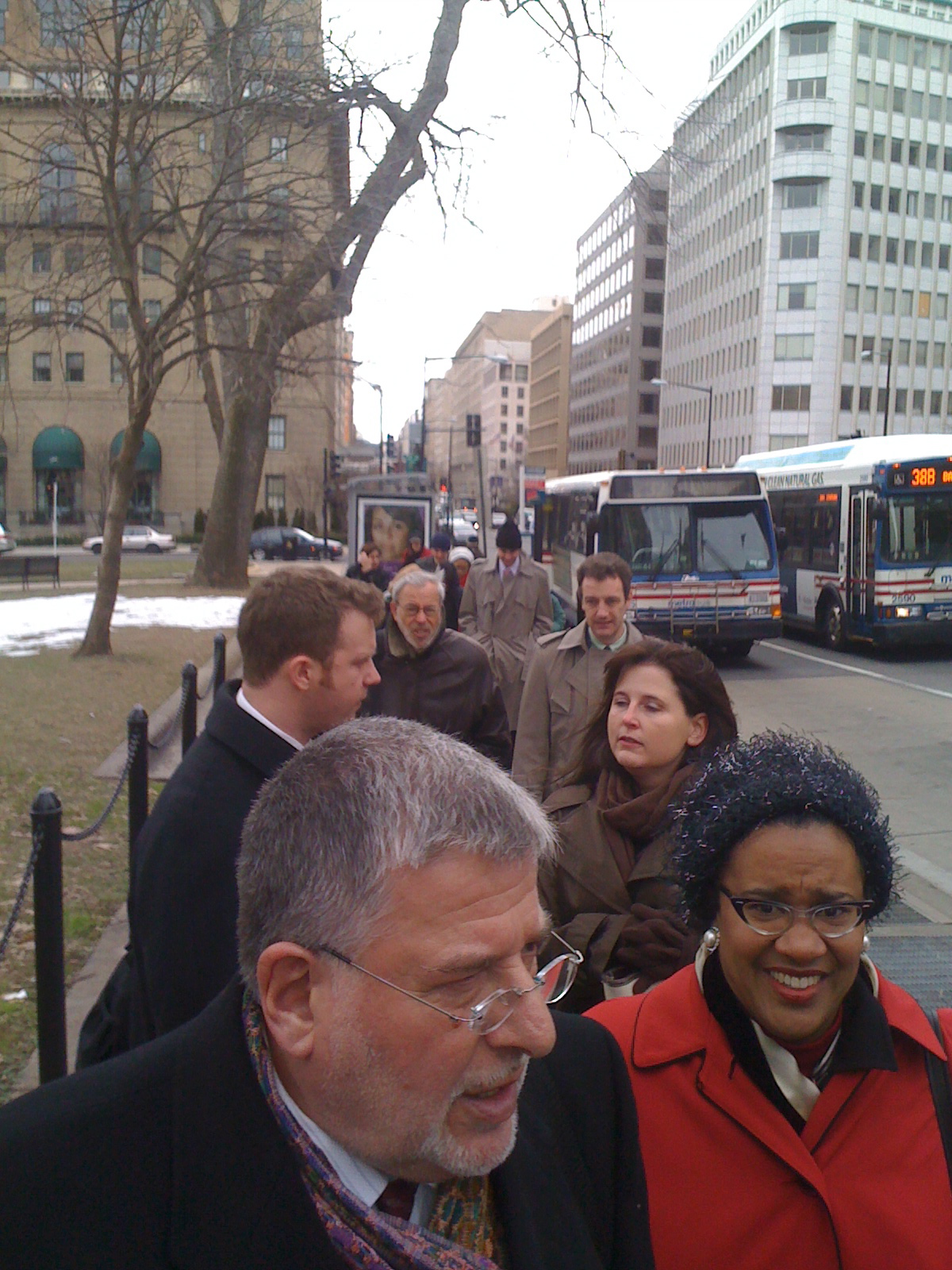 Some of the nearly-60 attendees included American Atheists National Spokesperson Dave Silverman and Matt LaClair and Catherine Blackwell of the Secular Student Alliance: 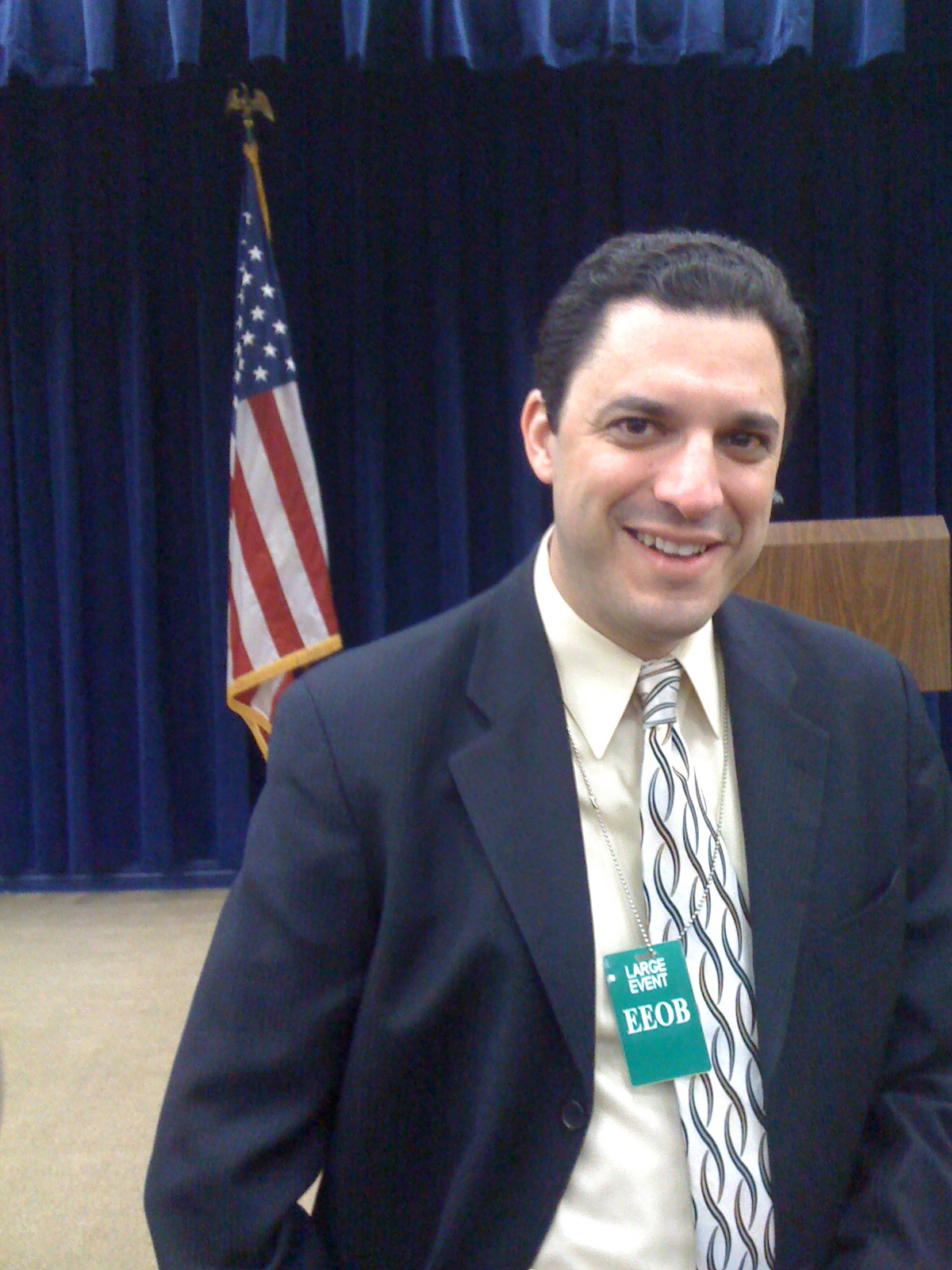 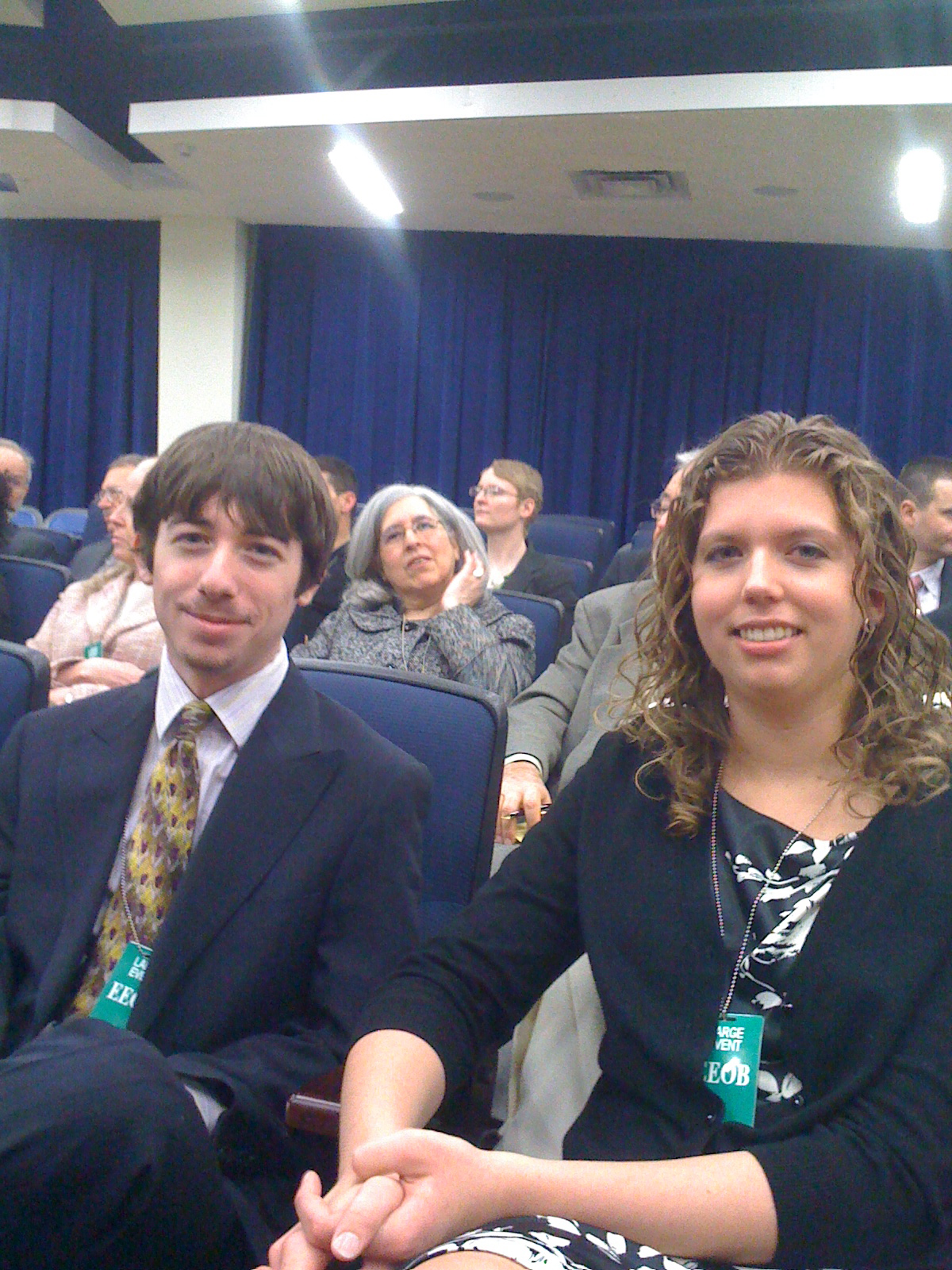 The briefing essentially consisted of a few White House officials — no, you probably don’t know them — explaining the Obama administration’s views on our various issues, specifically, religious exemptions for child abuse, military proselytization, and Faith-Based discrimination.

[SCA Executive Director Sean] Faircloth told ABC News that the group will brief Tina Tchen and Paul Monteiro, the director and associate director of the White House Office of Public Engagement and Intergovernmental Affairs; Bryan H. Samuels, Commissioner of the Administration on Children, Youth and Families at Health and Human Services; and Mazen Basrawi, Counsel to the Assistant Attorney General for Civil Rights at the Department of Justice.

Interspersed with those talks were comments from leaders in our community on these issues. 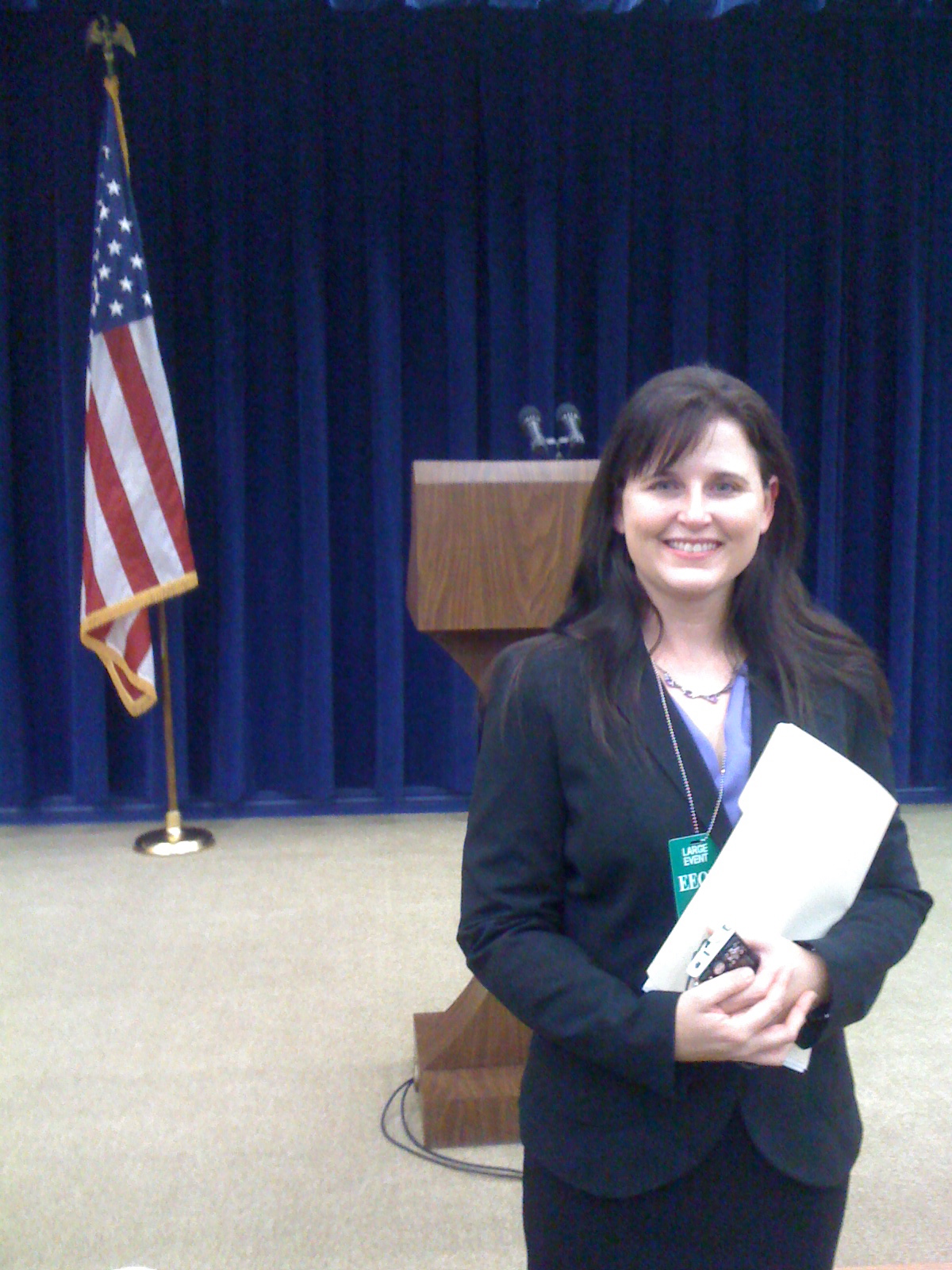 As part of the official briefing, American Atheists Vice President and Military Director Kathleen Johnson told White House representatives: “I have witnessed firsthand how service members who are openly non-theist have been harassed by their commanders, leaders, and peers, and have been disrespected by their subordinates for failing to hold certain religious beliefs.”

Johnson called for the Obama Administration to “demonstrate its commitment to improving the climate for non-theists by ensuring nominees to key senior leadership positions answer hard questions intended to identify if they hold views detrimental to non-theists and if so, that such views be considered a disqualification for that officer.”

One of the speakers I was most looking forward to hearing from was Liz Heywood, whose Christian Scientist parents denied her proper medical treatment as a child to care for her bone infection; instead, they just prayed for her. Not surprisingly, that failed. Her leg had permanent damage and three years ago (to the day), she had her leg amputated.

“I fell through the cracks at every turn,” Heywood said of her experience as a sick teen in a faith-healing home. “I am hoping I can make a difference with my story.”

Liz was unfortunately not able to attend because of weather issues, but she sent in a statement which was read by an SCA staffer. It was definitely the most powerful piece I’ve heard in a while (I’m hoping I can reprint it here soon).

So what do we take away from all this?

Will it do anything?

It’s tough to say. I think it’s important that the White House officials we met can now attach names and faces to our issues. They’re better educated about them and they can represent us a little better than before.

On the flip side, they’re not the policy makers. They can only take what we say and make recommendations to the relevant personnel.

In the meantime, we have to keep fighting for our issues and we need more people discussing them.

Still, this is the first time the White House has been willing to meet with atheists in such an official capacity and that’s a very positive step forward.

So what did the officials say in regards to our statements?

I can’t actually tell you.

[SCA Spokesperson] Paul Fidalgo… said he couldn’t offer any details about what Obama aides said in the meeting because of an agreement that their discussion be kept private.

President Obama — as expected — did not make an appearance.

Fidalgo said the went “very, very well” from the coalition’s perspective, that members were “encouraged by the reception we got today” and that they hope to be invited back for follow-up discussions.

I can, however, tell you what Catholic nutjob Bill Donohue had to say about the meeting:

People of faith, especially Christians, have good reason to wonder exactly where their interests lie with the Obama administration. Now we have the definitive answer. In an unprecedented move, leaders of a presidential administration are hosting some of the biggest anti-religious zealots in the nation.

If President Obama does not want to go to church, that is his business. But it is the business of the American people, most all of whom are believers, to know where the president and his administration stand with regards to their concerns. It is not likely that this outreach to anti-religious activists — many of whom would crush Christianity if they could — will do anything to calm the fears of people of faith. Indeed, it will only alienate them even further.

It is important that the public learn of the contents of this meeting. We will do what we can to find out what happened.

Right… He had a crazy partner-in-crime, too. Right wing group In God We Trust’s Chairman Bishop Council Nedd:

“It is one thing for Administration to meet with groups of varying viewpoints, but it is quite another for a senior official to sit down with activists representing some of the most hate-filled, anti-religious groups in the nation,” says In God We Trust’s Chairman Bishop Council Nedd.

“President Obama seems to believe that it is a good idea to have a key senior aide plan political strategy with people who believe faith in God is a disease,” Nedd says. “Some of the people in this coalition believe the world would be better off with no Christians and no Jews and they aren’t shy about it. The fact that this meeting is happening at all is an affront to the vast majority of people of all faiths who believe in God.”

Umm… I promise you we did not plot ways to kill off all religious people. We ran out of time for that.

Also, there were a number of Humanistic Jews in our group. I think they might take offense to Nedd’s comments… as would anyone else with a heart.

There’s nothing hateful about our group.

I doubt any of the right-wingers will listen, but one point all of our speakers made was that we were not looking for special treatment. We were there to support the right of all Americans to hold their religious beliefs — and reject them, too.