What is Skeptical Love? 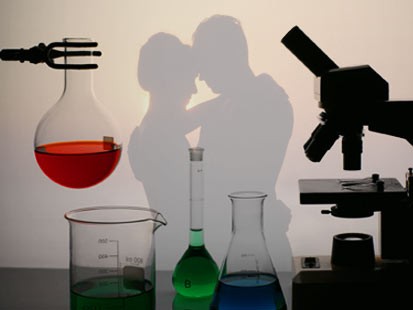 What is love?  People often say that they “believe” in love, or swear that there’s more to it than a set of feelings. I was involved in a Q&A a couple years ago in which an audience member asked me whether I had ever been in love. As I was telling him I would discuss private matters over drinks as long as he was buying, he proceeded to rant about how love is a gift from God and not just a chemical process.

But why should we assume a metaphysical explanation? My sister, Julia Galef, is going to be addressing the issue in the Valentine’s episode of a new podcast she’ll be co-hosting with none other than Massimo Pigliucci of Rationally Speaking. Yes, I’m proud of my family.

After trying to avoid the ‘cynical killjoy’ label by going on the record as “enthusiastically pro-love. (Also pro-kindness, pro-motherhood, and pro-puppies, in case anyone’s keeping track.)” she launches in:

However, as good skeptics, what do we do when faced with a mysterious and unexplained phenomenon? We look for explanations! Science has already found correlations between particular hormones and certain forms or stages of love. Dopamine is associated with romantic obsession, and oxytocin and vasopressin with long-term attachment. Evolutionary biologists also have some theories about why love developed (pair bonding was necessary to raise our helpless human young, for example).

There’s good reason to suspect that the word ‘love’ is an ambiguous term which refers to a broad combination of different emotions to different people in different contexts.  When we avoid the word and just address its various component feelings that are associated with the word, science seems to do a fine job of explaining it.

Like the word ‘soul’, ‘love’ is notoriously difficult to define and equally frustrating to discuss.  If we can’t provide a clear idea of what we mean when we each use a word, chances are it’s going to be a fruitless conversation.  We have no way of knowing whether we’re even talking about the same concept!  People take that confusion as a sign that love is somehow transcendent and metaphysical.  They forget that language is an imperfect tool, and assume that it must be difficult to discuss because it’s on a higher plane of existence.  Nope, we’re just apes who sometimes have trouble expressing ourselves.

What are the implications of a skeptical approach to love? Julia poses the question but withholds opinion until the podcast.

Finally, what if we could explain love scientifically — would that change our attitude towards it? Would the knowledge that this transcendent feeling is generated by the presence of a particular chemical in our brain detract from the transcendence? And if we were forced to admit that the concepts of “soulmates” or “true” love are nonsensical, would we love less deeply?

I’ll take a stab at it. Obviously, the physical emotions we feel would be untouched – the chemical reactions would occur and there would be the same attraction, devotion, and commitment. But if people derive extraneous pleasure from the thought that their love was fated, that pleasure could be lost through science.

When we unweave the rainbow and discover what makes its colors, it doesn’t become any less beautiful.  For many people, myself included, there’s an added sense of wonder at nature.  But it might ruin your day if you like the idea of leprechauns.

December 11, 2009
Can We Get an Atheist on the Supreme Court?
Next Post