A few weeks ago, I posted about the cheerleaders at Lakeview-Fort Oglethorpe High School in Georgia and their pro-Christian banners: 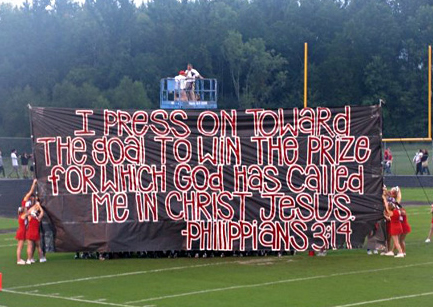 No doubt the banners were inevitably going to lead to a lawsuit. A parent complained and the cheerleaders were told to stop their proselytizing.

It was the right decision.

The Christians who thought they were being “victimized” by following the law here had an easy way to counteract this if they chose to — students could just bring their own pro-Christian signs to the game. That would be perfectly legal. 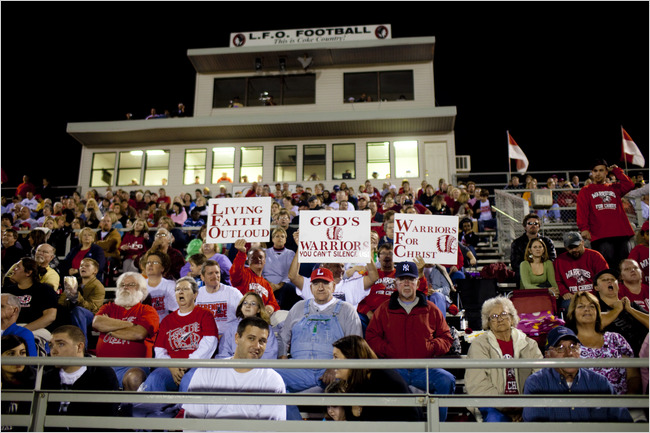 … a month later, the new policy has produced an unexpected result: more biblical verses than ever at football games, displayed not by cheerleaders but by fans sitting in the stands.

Startled and dismayed by the district’s policy, this town of 9,600 people has taken up the cause — and the signs — of the cheerleaders. Calling themselves Warriors for Christ, a twist on the school’s Warriors nickname, fans have held rallies at churches and a local polo field and sold more than 1,600 T-shirts bearing passages from Deuteronomy and Timothy.

A couple things stand out to me about this article.

First, we have the soundbyte from an atheist student:

Even Caleb Wickersham, a 17-year-old atheist from nearby southern Tennessee, acknowledges that fans are exercising a legal right to free speech. “From an atheist’s standpoint, it’s frustrating because I don’t want more religion in my face,” Caleb said. “But it’s their constitutional right.”

I love that quotation because he shares the sentiment I think a lot of us would have. He may not like it, but he acknowledges the legality of what the students are doing.

How many times do we hear about atheists publicly sharing their beliefs in a legal way (e.g. the atheist billboards, getting an atheist license plate, wearing a Scarlet A button, etc.) and the Christian response seems to always be, “This is offensive and it needs to stop”? I’m not saying it’s always the case, but it’s not very often I hear Christians saying “I don’t like it but it’s their constitutional right.”

The second interesting thing I learned is who led the way for the cheerleaders to stop using their pro-Christian banners:

The parent who contacted the school, Donna Jackson, is a graduate student at Liberty University, the evangelical Virginia institution founded by the Rev. Jerry Falwell. Ms. Jackson, who had taken a law class, says she was just trying to protect the school from litigation.

Some Christians are still pissed off they can’t display their banners on the field, but those are likely the same people who would get offended if the banner in question was anything other than Christian.

Do you think they’d be equally supportive of a banner that read:

(Thanks to Lyz for the link!)

October 27, 2009 Animal Sacrifices Before the 2010 World Cup?
Browse Our Archives
What Are Your Thoughts?leave a comment