Are Atheists Allowed to Like Christian Music? April 26, 2008 Guest Contributor

This girl had to deal with a frightening scenario:

Gwen Adams, a 33-year-old software designer and staunch disbeliever in the existence of God, accidentally enjoyed an uplifting song played on an all-Christian radio station while scanning the dial on her car radio during her drive home from work Tuesday evening.

“Since I [tuned in to the station] mid-song, there’s no way I could have known I was listening to a Christian rock station,” said Adams, struggling to find an excuse for her ignorant enjoyment of “What This World Needs,” a recent release from the Christian band Casting Crowns. “I was concentrating on my driving, so I wasn’t really paying any attention to the lyrics or their meaning. I was just kind of humming along with the chorus melody.”

Adams – who does not pray, attend church or read the Bible – reluctantly acknowledged a slight appreciation for the keen musicianship and slick songwriting apparent in the song she unintentionally savored, but refused to entertain the idea that she would ever intentionally listen to a song she knew to contain a spiritual message.

Adams confirmed Wednesday that she is seriously considering buying an iPod to listen to while driving in hopes of avoiding future accidental enjoyment of Christian radio songs.

I’ll admit it. There are plenty of songs about God/Jesus that I like. Or have liked at one point or another.

Flood by Jars of Clay.

What If God Was One Of Us by Joan Osborne.

Yeah, I don’t know what I was thinking with that last one, either…

(And for the record, yes that article is just satire.)

***Update***: How could I forget my favorite Christian band: Faith+One? 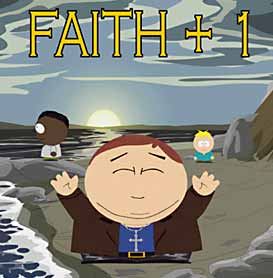