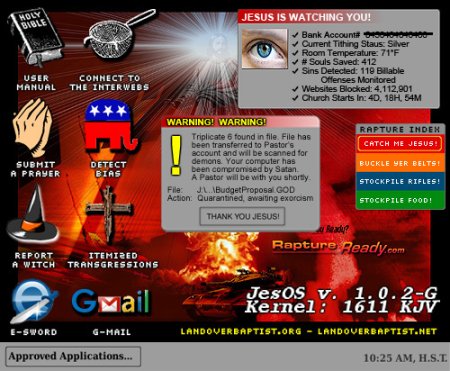 How does it work?

You should know that certain programs do not come with JesOS™:

Anti-virus protection will not be included. Instead, taking a cue from the instructions in the Epistle of James on faith healing, technical support will be available to pray and hear confessions in order to cast out computer viruses.

You don’t get a “Recycle Bin” either:

No “Recycle Bin” will be available on JesOS™. This ensures that the user won’t inadvertently lend credence to the Catholic idea of “purgatory”, when a file is deleted, it is gone. Jesus sends those bytes straight to the fiery pits of Hell — no if’s, and’s or but’s about it! Besides, True Christians™ don’t have any need to recycle in the real world, so why should we recycle on the computer?

The included Auto-Caps plugin will save time for a lot of Fundamentalist Christians, like some who comment on this very site:

Whenever it is detected that you are sharing the tough love of Jesus with homosexuals on the interwebs, the auto caps function WILL AUTOMATICALLY TRIGGER, SO AS TO AVOID HAVING TO LISTEN TO ANY SO-CALLED COUNTER-ARGUMENTS. Also known as the “O’Reilly-Factor.”

And, of course, since the system is in sync with the Republican Party’s servers, certain emails will be “deleted or lost according to the White House’s orders.”

September 9, 2007 I Would Be Less Likely to Vote for a(n) _____ as President
Browse Our Archives
What Are Your Thoughts?leave a comment