Kevin Sorbo, the Hercules actor who has since taken a conservative Christian turn, even playing the atheist professor in God’s Not Dead, has been accused of sexual harassment by one of his former co-stars.

Last week, in response to the resignation of Sarah Huckabee Sanders from her role as Chief Trump Propagandist, Sorbo posted this tweet condemning so-called “feminists” who took joy in the announcement:

Not one feminist has defended Sarah Sanders. It seems women's rights only matter if those women are liberal.

It was a dumb comment. Feminism doesn’t mean every woman in a prominent position must be celebrated, especially when her job is lying to the country to defend an alleged rapist whose ignorance knows no bounds. I can’t believe the guy from God’s Not Dead doesn’t understand nuance…

In any case, Sorbo was thoroughly ratioed on Twitter, with far more people mocking his tweet than sharing it without further commentary. But one of those responses came from Haley Webb, his co-star in the 2015 straight-to-nowhere movie Single in South Beach. (It’s so off anyone’s radar, there isn’t a single review about it at Rotten Tomatoes.)

In that film, Webb stars as a single woman in a relationship who falls for the married character played by Sorbo.

Her tweet offered a much more revealing picture of what working on that film was like behind the scenes.

I don't think the person who repeatedly tried to pressure his 3 decades younger co-star into sleeping with him, publicly shame her on set when she refused to and insist the director add unnecessary sex scenes between us should be flapping his gums about feminism. https://t.co/7kfb8sZvD2

I don’t think the person who repeatedly tried to pressure his 3 decades younger co-star into sleeping with him, publicly shame her on set when she refused to and insist the director add unnecessary sex scenes between us should be flapping his gums about feminism.

It used to be you were innocent until proven guilty. But, thanks to the internet, you can say anything about anyone and it doesn't matter if it's true or not. You are now guilty, period! Hey, it's on the internet, it MUST be true!

There’s real irony in Sorbo complaining about how people just “say anything about anyone” when the reason we’re even talking about him is because of his one-dimensional portrayal of atheists as people who hate God and are just one cocky Christian college student away from discovering Jesus.

That said, even if you’re inclined to believe Webb, as I am, claims that serious ought to be investigated before Sorbo is written off as some sort of on-set predator. Though one commenter at The AV Club says she worked on the film and confirms the behavior.

For what it’s worth, their film was released in 2015, a year after Sorbo gained a foothold in the Christian film market with God’s Not Dead.

(via The AV Club. Featured image via Shutterstock. Thanks to Brian for the link) 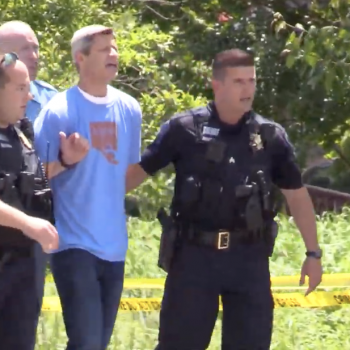