David Barton: The Second Amendment Gives Us the Right to Own a Nuclear Weapon December 4, 2021 Hemant Mehta

David Barton: The Second Amendment Gives Us the Right to Own a Nuclear Weapon

Christian pseudo-historian David Barton has always twisted and distorted the words of the Founding Fathers in defense of Christian Nationalism to ever more absurd lengths. That’s especially true when it comes to the Second Amendment, which Barton claims gives all citizens the right to own whatever weapons the government has. Any of them. All of them.

A couple of years ago, he made that argument in defense of owning personal tanks.

Now, however, he’s jumping all the way up to nuclear weapons. He made the remarks on his “WallBuilders Live” show on Thursday:

“The greatest people-killer of all has been government,” Barton said. “Nothing has killed more people than government has killed. And so when you look at that, the Founding Fathers believed that the people should be able to have enough arms in place to be able to remind their government you don’t want to mess with us, you don’t want to come after us. Well, if all we’ve got is peashooters and they’ve got .50 caliber machine guns, that’s not the point of the [Second] Amendment.”

“I don’t want to see my neighbor stockpile nuclear bombs — I don’t want to see it — but I don’t care if he has one because he should have the same rights [as the government],” Barton added. “But you say, ‘Well, I don’t think private citizens should have nuclear weapons.’ But if you’ve been trained with responsibility and morality and the concept of when and where you use them — the Founding Fathers were trained extensively and the concept of defensive warfare: You don’t start anything, [but] if somebody else starts it, you can take it on, but you don’t start it. I don’t care if my neighbor has a nuclear weapon as long as he has that defensive concept that he will never use that unless it’s being used against him.”

That may be the best argument I’ve ever heard for why the entire world needs to abandon nuclear weapons. Because the gun nuts will insist they’re fully trained to deploy a nuclear bomb if the government deserves it… which, of course, would be whenever Democrats do something truly awful like try to prevent a virus from spreading or make sure poor people have access to health care.

You can write off Barton’s statement as faith-based insanity all you want, but this idiot has influence over wide swaths of the conservative Christian world. Until white evangelical Christian leaders start admitting Barton is making this all up as he goes along and denounce him completely, he’s going to keep getting away with it.

No one should be treating the Constitution the way those same Christians treat the Bible, twisting and contorting the text to justify whatever it is they want to believe anyway.

December 4, 2021
Franklin Graham, Who Was Pro-Vaccine, Now Wants the Vaccine to Be Less Effective
Next Post 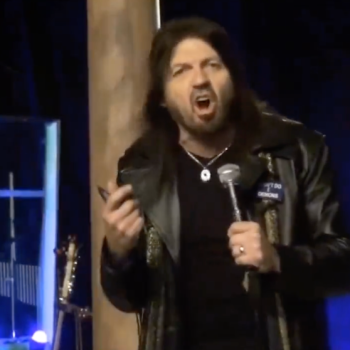 December 4, 2021 Evangelist: Genetic Testing Companies Like Vaccines Because They Want Your Soul
Browse Our Archives
What Are Your Thoughts?leave a comment