MAGA “Doctor”: Vaccinated Christians Can Still Ask God to “Cast Out” the Shots

Last summer, conservative media outlets and Donald Trump promoted a video in which a group of doctors spoke about dangerous COVID conspiracies. The star of that video was Stella Immanuel, who said face masks were effectively useless and that she successfully used hydroxychloroquine on her own patients.

It didn’t take long before we learned even more about the pediatrician/minister. It turned out Immanuel had previously blamed gynecological problems (like endometriosis) on people dreaming about having sex with demons, and said that alien DNA was used in medical treatments, and claimed that scientists planned to use vaccines to stop people from being religious, and said homosexuality would lead people to Hell. Those were obviously all lies.

She’s gone on to say that Satan’s clones are attempting to murder unvaccinated people.

And now, for her latest trick, she’s telling vaccinated Christians that God can help them undo the effects of the vaccines. (Notice the chyron describing her, completely seriously, as a “Frontline Doctor & Demon Slayer.”)

Right-wing anti-vax conspiracy theorist Stella Immanuel tells those who have taken the COVID-19 vaccine that if they cry out to God in repentance, God will physically cast the vaccine out of their bodies. pic.twitter.com/1afPdXZUXj

If you’ve taken this vaccine, there is a way out!… If you repent and cry out to God for mercy, He will deliver you… When it is Lucifer, when it is the Devil… it can be cast out in the name of Jesus…

… We are casting this thing out of people! It is Lucifer!… So you need to pray, if you’ve taken this vaccine, pray, ask God to have mercy on you. Kneel down. Say, “Father, I was deceived. I did not know. I was terrified.” God will show you Mercy because he knows the duress and the stress we have all been under.

You know what? I’m fine with that. I encourage all anti-vaxxer Christians to get vaccinated and boosted and then pray for deliverance afterwards. Better to have God release you from the supposedly nasty effects of the virus than to pray before you get your shots.

Society would be better off if Christians got vaccinated, then spent their post-shot 15 minutes of waiting praying to God and repenting for what they’ve just done. Do that every time. Do that after the booster, too. 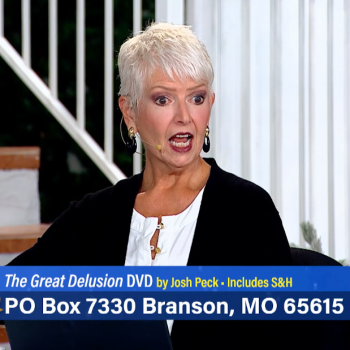 November 23, 2021
End Times Preacher: A Reptile Alien Imitating My Husband Tried to Sleep with Me
Next Post

November 24, 2021 Pastor Resigns After Telling Men "the Best Person to Rape is Your Wife"
Browse Our Archives
What Are Your Thoughts?leave a comment