As much criticism as I’ve dished out against churches of all stripes, I’ve never understood the desire for some people to vandalize those buildings. (About a decade ago, when a couple of churches in Oregon were tagged with atheist-adjacent messages, we raised money on this site to assist with clean-up efforts.)

Just consider what supposedly happened to hate-preacher Greg Locke‘s circus-tent church last summer when people spray-painted things like “Fascists Beware.” It gave him positive press because he could play up that whole persecuted Christian angle.

It was the least effective way to make a perfectly valid point.

Similar things have been happening at a faster pace at Catholic churches over the past few months.

Now, in a Washington Post opinion piece with a byline from Denver’s Archbishop Samuel J. Aquila, who has seen graffiti of swastikas and other messages on buildings in his jurisdiction, calls on everyone to take these acts of vandalism seriously:

… You would likely have to go back to the early 20th or late 19th centuries, when an influx of Catholic immigrants challenged a mostly Protestant culture, to find so much public antagonism toward the Catholic Church.

Today, Catholics are far from the only people of faith being attacked. The Mormon Church has reported its own dramatic spike in violence and vandalism of their temples. Numerous African American churches suffered property damage over the past year and a half following protests over racial justice. Buddhist temples and Muslim mosques have been targeted too, while Jewish communities are facing historic levels of antisemitism, including attacks on synagogues and cemeteries. Hate crimes, which include religiously motivated attacks, will likely set a 20-year record in 2021.

… People of goodwill, whether religious or not, must condemn and confront the societal trends that encourage attacks on houses of worship — trends that extend far beyond religion.

I fully agree with that sentiment. Not only does the vandalism fail to make the intended point, it arguably backfires by making people more sympathetic to the religious institutions. We’re supposed to criticize beliefs, not people or their places of worship.

I should point out that virtually none of these acts, as far as I know, were committed by atheists lashing out against religion as a whole. Still, atheists should be among the first to condemn the acts since we are the most likely targets to blame. Also, because most of us, I would hope, respect the right of conscience. Religious freedom includes a right to disbelieve, yes, but it also means a right to believe whatever you want about God without fear of persecution.

That said, this line from the essay deserves an eye-roll:

… Respectful conversation has given way to spiteful confrontation, and the long-standing attitude of live and let live is being replaced by live as I want you to live.

It’s deeply ironic that a Catholic archbishop is trashing the idea of “live as I want you to live” when the Catholic Church has routinely opposed things like abortion rights, LGBTQ rights, and death with dignity. Church leaders want everyone to live like them even when the people in their own pews disagree. (Has Aquila ever heard of the Crusades?)

Some of the vandalism the archbishop condemns are pro-choice messages. Yes, the vandalism is wrong. Let’s not forget, though, that it’s a far bigger problem for Church leaders to force women to give birth against their will — something they’ve pushed for or achieved whenever they’ve had the power to do so.

If Aquila and his co-author wanted to make their point even more strongly, they should have at least acknowledged why so many people are angry with these institutions. It’s not like the fury just appeared out of nowhere. Any attempts to inject reason and decency into Catholic doctrine have been stonewalled. And that’s part of the problem!

There’s no pathway for criticism to be heard in church settings. The archbishop and other religious leaders have no desire or ability to address the valid complaints of their critics. That’s why so many of these people are resorting to graffiti: They see no other option to be heard. Without a way to spur change that is sorely needed in those archaic institutions, I fear that the vandalism isn’t going to stop. 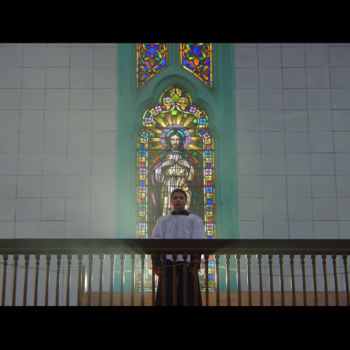 November 22, 2021
How Six of the Catholic Church's Abuse Victims Faced Their Trauma Decades Later
Next Post