Two Women Suing Liberty U. for Mishandled Sexual Assault Claims Are Speaking Out

For years now, Liberty University has been criticized for its absurd rulebook (“The Liberty Way”), which is so full of double standards, especially on matters of sex, that it has routinely put female students in danger. Back in July, 12 women sued Liberty University, claiming that officials there “intentionally created a campus environment where sexual assaults and rapes are foreseeably more likely to occur than they would in the absence of Liberty’s policies.”

If reading a lawsuit isn’t your idea of a good time, you may appreciate this narrative version of what happened, courtesy of ProPublica. The bottom line is that even victims of sexual assault felt they couldn’t report what happened to them because they feared getting punished for either having sex, or drinking, or putting themselves in a position where sex (even non-consensual sex) was on the table. It was a very Well, what were you wearing? philosophy. Liberty seemed to punish female victims of sexual assault far more harshly than they ever punished the male perpetrators.

When that lawsuit was filed, the 12 women were anonymous. Some of them have told their stories publicly, but by and large, they have not come out publicly as plaintiffs in the lawsuit.

That finally changed recently when two of the women involved in the lawsuit — Chelsea Andrews (Jane Doe 7) and Heather Wendel (Jane Doe 13) — spoke on camera with Lisa Guerrero of Inside Edition. It was the first time they’d met each other in person.

If nothing else, listen to the bit at 5:11 when Guerrero talks about Liberty’s response to the lawsuit.

This story isn’t going away anytime soon. There’s already a film in the works about the Liberty U. sexual assault scandal in a project that involves Tom Arnold (who played an unexpected role in bringing down Jerry Falwell, Jr).

The Liberty University Project [working title] will follow the women’s legal case as well as exploring the darker side of the influence and power wielded by the University.

It’s up to Liberty’s administration how long they want the school to be either a punchline or a synonym for everything wrong with Christianity. They’re not doing themselves any favors with their response to the lawsuit so far. 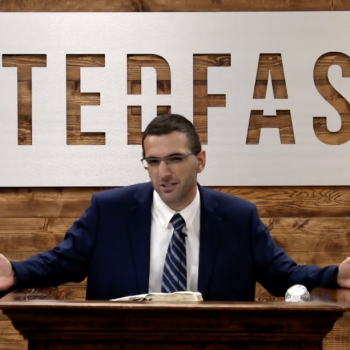