Back in April, a public school teacher and an administrator from Oregon went public with their anti-transgender views. They did it on their own time, but they used school equipment to film their hate-speech. The question was whether they deserved to be punished for any of that.

You can read all the details here, but here’s a summary of what happened: State lawmakers were planning to pass a bill making sure LGBTQ students weren’t put at any kind of academic disadvantage because of who they are. It’s a fairly innocuous piece of legislation, but it infuriated Rachel Damiano (an assistant principal) and Katie Medart (a science teacher) of North Middle School in the city of Grants Pass. So they began a campaign called “I Resolve” in order to push back against the bill. That campaign said educators shouldn’t have to call students by their preferred names or pronouns and implied that trans people didn’t exist (because there are only “two anatomical gender presentations”).

The women were placed on administrative leave at the time while the district figured out what to do.

On the flip side, it could be argued that LGBTQ students wouldn’t feel safe in school knowing how their teacher and administrator really felt about them. If a Black student knew a teacher belonged to a group advocating white supremacy that met on weekends, it would affect their relationship in school.

The district ultimately fired both women. The school board voted 4-3 in July to terminate their employment — not because of what they said, but because the women used school resources to promote their advocacy work.

To substantiate the claims that Damiano “used time during her working day for political campaign purposes,” and “used district facilities, equipment or supplies in connection with the political campaign,” the investigation cited an email she sent to Shapiro.

A copy of that email obtained by KTVL shows Damiano used her school email address when messaging [Ben] Shapiro and the Daily Wire crew to ask them to support her resolution.

Now, however, the same school board has voted to reverse that decision, again 4-3. The two women have been unfired. The board didn’t explain the rationale for this, though they may have been spooked by a federal lawsuit filed by the victim-cosplaying women against the district. (The conservative Pacific Justice Institute, which represents the women, says the lawsuit will continue despite their reinstatements.)

“They’re not dropping a thing,” [attorney Ray] Hacke said. “Because they’re teachers, they have the right to speak on matters of public concern as private citizens, just like anyone else — that’s actually kind of the point of this lawsuit. And they’re not dropping the lawsuit either, because there are policies in place that the District has concerning speech that are unconstitutional on their face and as applied, and so those policies need to be changed. And if the District isn’t willing to do it themselves, we’re going to ask a federal court to do it for them.“

The bottom line is that, even if their actions were technically constitutional, students will once again have to deal with two adults who spend their free time thinking up new ways to hurt LGBTQ students in the name of Jesus. I don’t have a strong opinion on the legal side of this — there’s no ironclad rule about how much personal stuff teachers can work on during their free time at school. But substantively, their being in the school will create a worse environment for LGBTQ students and their allies.

The best response, then, is to make sure students throughout the district are well aware that Rachel Damiano and Katie Medart are anti-LGBTQ zealots who buy into right-wing propaganda about trans people. They’re bigots, first and foremost, not educators. They want to make sure LGBTQ students don’t have the legal protections they deserve. And the school board is eager to help them create a culture of hostility against a certain group of students.

Just an awful situation all around. 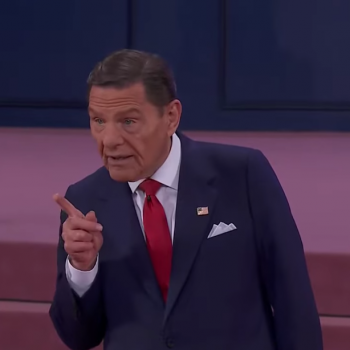