Earlier this month, while hiking through Golden Ears Provincial Park in Vancouver, a group of Sikh men saw two men stuck on a rock below them while a raging river threatened their safety. They had no idea if rescue workers were on their way because of the shoddy reception… so they decided to MacGyver it.

The men removed their turbans — something that their faith normally prohibits in public — and tied the cloth together to create a makeshift rope ladder. They soon pulled the two men to safety.

“They said, ‘Two people are stuck there. Can you help them? Can you call 911?'” said Kuljinder Singh.

“We didn’t have any other equipment to save them,” the 22-year-old said. “We only had our turbans to save them.”

“In my Sikh culture, the turban is for that, to help save the life of people who need the help,” explained Singh.

It turned out rescue workers were already on their way, but by the time they arrived on the scene, the problem was solved. That video, by the way, wasn’t one they posted anywhere at first. It was only when the media requested it that they consented to sharing it.

This week, the five men were honored by the Royal Canadian Mounted Police for their actions:

Supt. Wendy Mehat with Ridge Meadows RCMP praised the actions of the group.

“The two young men were in danger of drowning,” Supt. Mehat said at Tuesday’s ceremony. “Your quick thinking and your heroic actions undoubtedly saved the lives of the two young men at Golden Ears Park.”

At the ceremony, Supt. Mehat also paid tribute to the religious significance of the rescue. In Sikh faith, turbans should not be removed in public and can only be taken off in the privacy of the home.

“In these matters we really don’t care if it’s religious or not. It’s one person’s life, we can save it,” [Gurpreet] Singh said. “We can tie it (the turban) again as many times as we want, but that life, we can’t bring it back.”

It’s a beautiful story that also shows how even religious beliefs can be temporarily set aside for a greater good. No one would dare suggest these men violated their personal principles by helping two strangers. And yet they also seem like anomalies at a time when conservative Christians are making up their own faith-based rules in order to hurt strangers during a pandemic.

These guys removed their turbans because the underlying message of their faith was more important than any specific rule. We’d be in a better world if more believers took that idea to heart. 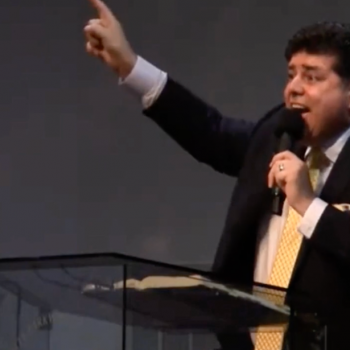