Preacher: If the Government Executed Gays, I Wouldn’t Have to Condemn Their Sins October 18, 2021 Hemant Mehta

Preacher: If the Government Executed Gays, I Wouldn’t Have to Condemn Their Sins

During a sermon yesterday by Brother Salvador Alvarez of Stedfast Baptist Church in Oklahoma City — an offshoot of hate-preacher Jonathan Shelley‘s Texas church of the same name — Alvarez fantasized about what the world would be like if the government did its job and executed certain sinners. Specifically, gay people, pedophiles, and adulterers.

He was complaining about hate crime laws that protect LGBTQ people and his fear that people like him would be prosecuted for calling out “sin”… presumably by using slurs and other forms of hate speech.

He was upset with hate crimes laws that he claimed would target preachers like him. pic.twitter.com/ZN7ki7VC7w

[Warning: There are slurs in the transcript.]

… Now they want to execute judgment on the good who will disdain the abominable act of sodomy — you know, the faggots. People who will have a violent attitude towards the faggots and sodomites will be reported as having committed hate crimes. You know, that’s a mixed-up… that’s a mixed-up justice system. And it needs to be called out.

If they were to… execute judgment — you know, that “he beareth not the sword in vain” — where they execute… you know, executions… executions like the Bible says? They actually execute? You know, you don’t go with a sword and slap them. It’s the sword to be able to have executions in Romans 13.

If they would actually commit executions on the pedophile, executions on the faggots, on the sodomites… If they had executed… executed, you know, an adulterers [who] are committing adultery with another man’s wife, then — then — we wouldn’t have to call them out.

Naturally, Alvarez thinks using slurs against gay people is Jesus-like. He also misunderstands the nature of hate-crime laws, which don’t go after religious people with anti-LGBTQ views but are meant to protect LGBTQ people in the wake of violence or terror against a member of their community.

This isn’t just a one-off point, either. Remember that Jonathan Shelley, the guy running the other Stedfast Baptist Church, made news over the summer when he celebrated the accidental death of a gay man at a Pride parade and told his congregation he hoped all LGBTQ people were killed.

After receiving backlash for that comment, he doubled down on it and suggested gay people were just pedophiles-in-waiting who are out to get your children.

That’s what these New Independent Fundamentalist Baptist preachers believe and why media outlets like YouTube shouldn’t be allowing their hate speech on their platforms. (I’ve reported the video from Alvarez.) 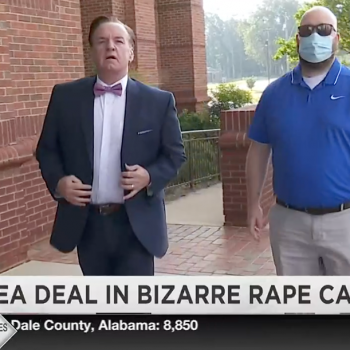 October 18, 2021
A Pastor Who Raped and Impregnated a 14-Year-Old Girl Will Face No Jail Time
Next Post 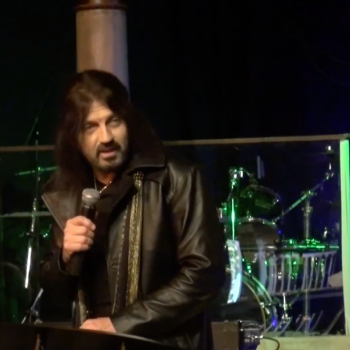