Last week, Right Wing Watch uncovered footage of North Carolina’s Lieutenant Governor Mark Robinson speaking at a church over the summer and saying children in public schools shouldn’t be taught anything LGBTQ because those topics were inherently sexual and anti-Christian. He specifically said schools shouldn’t tell children “about transgenderism, homosexuality, any of that filth.”

What filth was he referring to? Their existence? That had to be what he was referring to — it’s not like schools teach kids about sex acts. The implication was clear: Any acknowledgment of LGBTQ issues or people should be forbidden because, to Christians like Robinson, it was all filthy.

And now he’s getting approval from evangelist Franklin Graham, one of the most prominent Christian voices in the country:

Mark Robinson, the Lt. Governor of NC, is coming under fire for his strong stand against teaching transgenderism and homosexuality in our schools. Democrats, of course, are calling for his resignation. The comments that the woke cancel culture are so upset about were made personally when he was speaking at a church on a weekend. He called these topics being pushed on students “filth.”

… Thank you Mark Robinson for having the guts to stand up and tell the truth. God bless you!

Once again, what do these people think schools are teaching? More importantly, Robinson didn’t call the topic of homosexuality “filth.” He implied LGBTQ people are “filth.” That’s quite a departure from the typical evangelical stance, which preaches “love the sinner, hate the sin” and targets actions over individuals.

On a side note, Graham also just tosses in the phrase “woke cancel culture” as if it has any meaning. Graham’s just upset that people are criticizing a conservative politician for spreading faith-based hate by quoting his own words verbatim. People didn’t take his words out of context. Robinson meant what he said, doubled down on it later, and is riding a wave of right-wing support for espousing hate. That’s not “cancel culture” in any meaningful way.

Notice, too, that Graham didn’t quote Robinson’s worst remarks. The full line was “There’s no reason anybody, anywhere in America, should be telling any child about transgenderism, homosexuality, any of that filth.” Graham only repeated the word “filth.” It’s like he knows exactly what the problem is with Robinson’s remarks… but he doesn’t have the courage to do anything but offer unequivocal support. 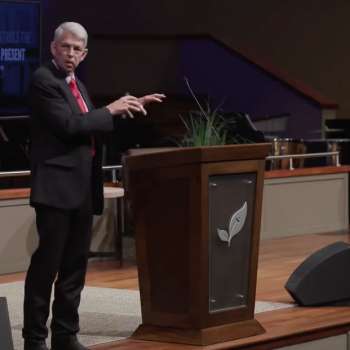 October 14, 2021 David Barton: Southern Slaveowners Just "Didn’t Read" the Bible Much
Browse Our Archives
What Are Your Thoughts?leave a comment