Christian “Prophets”: There Will Be a New President… But “It’s the New Trump!” October 8, 2021 Hemant Mehta

Christian “Prophets”: There Will Be a New President… But “It’s the New Trump!”

Self-described Christian “prophet” Manuel Johnson of Mega Praise Ministries (last seen riding a motorcycle with God) and fellow preacher Delora OBrien (without an apostrophe) appeared on a livestream yesterday where they discussed the upcoming return of their savior… Donald Trump.

At one point, OBrien claimed she heard there would be a “new president” in the future. But don’t worry. MAGA cultists: “It isn’t a new one! It’s the New Trump!”… by which she meant Trump wouldn’t be listening to his old advisors anymore. He’d ignore the people “brought from Hell” and return to power after uncovering those bad people in “white robes.” (Interesting choice of fashion.)

These Christian "prophets" agree there will eventually be a new president… but "It isn't a new one! It's the new Trump!"

The New Trump won't have advisors "brought from Hell." pic.twitter.com/WkldYuTDlm

I can’t do a full transcript because the last ten seconds are clearly not in a language from this planet.

Whatever the case, this is what happens when you’re convinced Trump and only Trump is the apotheosis of God’s Master Plan. Nothing he says or does can ever convince you that you’re wrong. You’re living in fantasyland and no amount of death or suffering — or incompetence or cruelty — will change your mind.

The irony of all this is that people have been saying for years that Trump would change his old ways — or has changed his old ways — and he’s never changed at all. He’s always been the same greedy, narcissistic, corrupt, predatory monster. The people claiming he’s changed are the ones who need help. 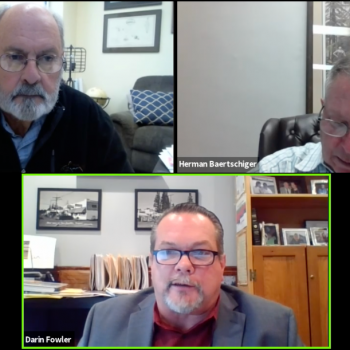 October 8, 2021
Oregon Official: "Ask God" About Vaccines Because "You Can't Trust the Doctors"
Next Post

October 8, 2021 Podcast Ep. 395: France's Catholic Church is a Hotbed of Abuse
Browse Our Archives
What Are Your Thoughts?leave a comment