We already knew evangelical financial “guru” Dave Ramsey was the Boss From Hell for ignoring COVID precautions in the workplace, planning a no-mask holiday party last December, and reportedly pulling out a gun during a staff meeting. He also micromanages the private lives of his employees, doing things like firing them for having sex before they’re married, because he believes working for him means everyone has to obey his version of Christian Fundamentalism at all times.

Now, a woman has filed a federal lawsuit against his company claiming that she was fired for being a lesbian.

Julie Anne Stamps was married to a man when she was first hired at Ramsey Solutions in 2019. But a year later, Stamps came to terms with the fact that she was gay. She and her husband separated soon after. During that time, she confided about her home life to her supervisor at the company, Melissa Wilhoite.

When the divorce occurred, Wilhoite told Stamps to see a Christian counselor — specifically one who had supposedly “saved” someone else from “a homosexual sexuality.”

Beyond that, Stamps asked what would happen if she came out publicly — by letting other colleagues know what was going on. She was told very clearly it could jeopardize her employment.

The bottom line was that Stamps wasn’t allowed to bring her new female partner to a company holiday party, to the workplace at all, or even post about their relationship on social media. In other words, she had to lie about her personal life… which she said violated the company’s own policies demanding honesty and integrity.

Stamps came out. And just like that, she was told to resign. She was let go just days after the Supreme Court ruled that discrimination based on homosexuality was illegal because it violated Title VII of the Civil Rights Act of 1964. Not only that: Stamps maintained she was still a devout Christian and her sexual orientation didn’t post a threat to her sincerely held beliefs.

Naturally, a spokesperson for the company said everything was her fault because Ramsey can do no wrong.

“As Ms. Stamps knows, she left Ramsey Solutions voluntarily and on good terms to pursue another career opportunity,” a Ramsey Solutions spokesperson said in a statement to The Tennessean. “Months later, Ms. Stamps changed the story to falsely accuse her former supervisor and friend of discrimination. While we are saddened by Ms. Stamps’ sudden reversal, we look forward to defending the company and her supervisor.”

The question really boils down to whether a public, for-profit company run by a fundamentalist Christian can require employees to adopt the founder’s extremism. In a sane world, that would never happen. But this case is just another reminder of why no decent person should work with Ramsey. He’s a Christian control freak who thinks he should control the sex lives of everyone under him. He’s a corporate manager who effectively functions as a cult leader.

(Thanks to @FaithfulAthei5t for the link. Portions of this article were published earlier)

October 3, 2021
Priest Admits Stealing $30K from Church and Using It for Men He Met on Grindr
Next Post 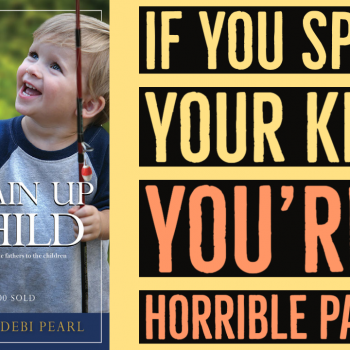 October 3, 2021 If You're Spanking Your Kids Because God Said So, You're the Problem
Browse Our Archives
What Are Your Thoughts?leave a comment