The Supreme Court said today it would hear a case involving a Christian flag. The decision comes after the First Circuit Court of Appeals ruled this past January that the city of Boston was within its rights to reject flying a Christian flag outside City Hall Plaza.

Some background: Harold Shurtleff is the director and co-founder of Camp Constitution, a non-profit group that promotes Christian Nationalism. In 2017, Shurtleff applied for a permit to raise a Christian flag on a pole outside City Hall Plaza to commemorate “Constitution Day and Citizenship Day”… but the city of Boston rejected the request.

Shurtleff contended this was religious discrimination… even if the same rules prohibited atheist flags and Islamic flags and every other faith-based flag from going up. He said there were plenty of other flags with religious symbols that the city put up, including the national flag for Portugal during the city’s Portuguese-American festival. The city even acknowledged the significance of that symbol on its website at the time, he said. Plus, the city flag for Boston includes a Latin phrase that translates to “God be with us as he was with our fathers.”

Officials told him non-secular flags weren’t allowed on the city’s flagpole. They also implied that an explicitly Christian flag was different from a national or local flag that happened to have a religious symbol on it. Shurtleff wasn’t buying it, so he filed a lawsuit in 2018 claiming this was a violation of his constitutional rights.

He didn’t get very far with that one. That year, U.S. District Court Judge Denise J. Casper denied him a preliminary injunction. And in 2020, she officially rejected his challenge. In short, she said that Boston had every right to reject his Christian flag.

What about the argument that it was hypocritical to say no to a Christian flag while saying yes to a national flag with a Christian symbol? Not at all, the judge said.

Simply put, unless the city was allowing other religious or atheist groups to put up their own flags in promotion of their beliefs, Christians didn’t have a special right to do the same. And the city had good reason to say no to faith-based (or atheist) flags altogether.

Shurtleff appealed the decision, and last summer, a coalition of 18 groups, including Americans United for Separation of Church and State and the American Humanist Association, urged the Court to uphold the earlier decision in an amicus brief. Their plea rested on two basic arguments: The original decision was consistent with our understanding of the Establishment Clause, and Boston’s policy denying religious flags was good for religious freedom:

Earlier this year, the First Circuit Court of Appeals ruled in support of church/state separation.

Boston is “entitled to select the views that it wants to express,” U.S. Circuit Judge Bruce Selya wrote for a three-judge panel.

And the refusal to fly the flag “simply cannot be construed to suggest the disparagement of the plaintiffs’ religion,” the 86-year-old Reagan appointee added.

“Although the plaintiffs might perhaps make the case that a lone Christian flag, nowhere near City Hall, would be seen as devoid of any connection to a government entity, a City Hall display that places such a flag next to the flag of the United States and the flag of the commonwealth of Massachusetts communicates a far different message.”

The other two judges, both Clinton appointees, signed onto that decision.

The AHA welcomed the ruling while pointing out how the case never should’ve gotten this far at all:

“While this is a victory no doubt, the fact that a federal appeals court even had to entertain the question of whether a city can refuse a Christian flag is itself alarming,” AHA Legal Director and Senior Counsel Monica Miller opined. Miller explained, “The Christian right is using the guise of ‘religious freedom’ to eradicate separation of church and state and this case is but one example.” “We are grateful the First Circuit reached the only correct conclusion, but it is scary to think how this case would have ended in a different circuit or the Supreme Court.”

AHA Executive Director Roy Speckhardt observed: “It is a relief to see that federal courts still respect the separation of church and state and understand the harm religious displays on government property can cause.”

Well, the case is about to go in front of the Supreme Court… which has spent much of its latest iteration rubber-stamping any request made by religious groups no matter how irrational it seems.

Simply put, if the Court allowed a Giant Christian Cross to remain up on government property, and it’s only gotten more conservative since then, they’re almost certainly going to say religious speech can’t be prohibited in this particular manner. (Am I a lawyer? No. Will my prediction come true? Yes.)

The question really becomes how far the Court will stretch that privilege. And how soon Satanists will get to apply to put up their own flag.

To be clear, the Court has an easy way out of this. There was no persecution in play here. If Muslims or atheists attempted what Shurtleff did, they would have also failed. The difference is that those groups know better than to try it. Shurtleff was just whining over nothing.

And now, unfortunately, he’ll almost certainly be rewarded for it. 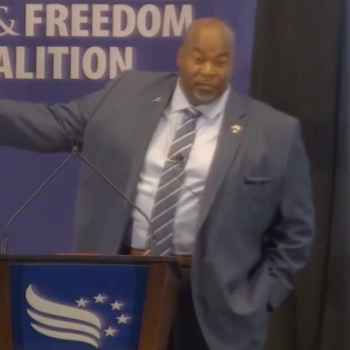