Anti-Abortion Activist: After My Prayers, a Little Boy Came Back from the Dead September 25, 2021 Hemant Mehta

Anti-Abortion Activist: After My Prayers, a Little Boy Came Back from the Dead

On yesterday’s episode of The Jim Bakker Show, anti-abortion activist Janet Porter went on a tangent about how she recently heard about a child who came back from the dead.

Did you know a boy who drowned came back to life this month? Me neither. But anti-abortion zealot (and wannabe sitcom actress) Janet Porter says her prayers resurrected a dead child. pic.twitter.com/pGWiVe7dnz

… I’ll just tell you one story — wasn’t planning on telling you this. We were filming in Fort Lauderdale over Labor Day weekend, and there was a little boy — a nephew of one of our cast members — and they said he drowned.

And so we stopped filming. We’re, like, four hours behind our filming. We stopped. And we just prayed — the entire casting, the entire crew — we just stopped and we prayed.

And we asked God to give us that little boy back. I mean, it’s a ridiculous prayer… it’s absolutely… you know, the kid’s dead. They tried to resuscitate him. He’s dead. Three-year-old fell in the pool… This little boy’s Tristan. And we were praying. We started shifting. We started talking about other times we’ve seen God do the miraculous.

… and in about, maybe, ten minutes later, we were 40 minutes praying for this little boy, who was gone. He was dead. And we started thanking God for what He did.

And one of the girls got a text. She came running down the hall. And we heard these words: “He’s alive!”

This little boy, who was dead, is alive. We serve a God of resurrection power. He can stop tsunamis. He can raise the dead. He can end abortion. That’s who we serve.

First of all, I sincerely hope she’s filming season two of her god-awful sitcom because you have to appreciate whenever people in a hole keep digging.

Second… what?! Show me the medical records saying he died. Where are the doctors calling this a miracle?

It never crosses Porter’s mind that everyone was just honesty mistaken. It never crosses her mind to thank the lifeguards or emergency medical workers who came to the boy’s rescue, only God. It never strikes her as bizarre to thank God “for what He did” even though, in her mind, He just drowned a boy.

It also doesn’t make any sense that she thinks her prayers could override God’s Will if that boy was meant to die; if that works, what does it say about all the prayers of parents whose kids ultimately died due to similar tragedies?

And why the hell would anyone care about filming anything when the nephew of a cast member just died a terrible death?!

Of course, Porter’s conclusion after all this is that women who are victims of rape should be forced to give birth against their will because that’s how her demented Christian mind works.

As you’d expect, none of the other co-hosts or guests asked her any of these questions. They just accepted it as fact and moved on. 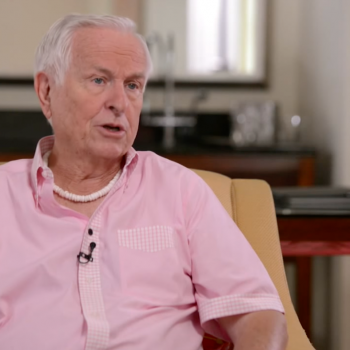