An Ohio Pastor Gave an Anti-Trans Sermon. His Church Is Pretending Otherwise.

Earlier this month, at Dover Apostolic Church in Ohio, Pastor Joe Perry delivered a sermon in which he just went off on some random transgender student at a local high school.

He explained that the trans boy (whom he referred to, wrongly, as “she”) wanted to use the boys’ locker room. And this, for some reason, deeply affected him. He said the community’s “family values” were being “shaken.” He even urged church members to call the superintendent to let him know trans students shouldn’t have rights.

In other words, this pastor spent a sermon denouncing the existence of a trans child in their community and told the church to take action to make that student’s life worse.

That video was quickly removed from Facebook — I’m not sure whether Facebook took it down after complaints, as one church member claimed, or the church removed the video itself to avoid bad publicity. Either way, a church representative told me they have no copies of the sermon because the Facebook livestream was the only recording they had.

But one person managed to record a portion of that sermon video on her phone before it was taken down (and posted it in a way that doesn’t allow for embedding). I know the video is literally hard to hear, but I did my best to transcribe it:

… Our family values are being shaken! They’re being restructured. You heard me talk Wednesday about an incident at Dover High School… there was, I have a friend that, he kind of put out there, and I think I shared it on Facebook, but had put out there that there was someone that felt like they identified as a boy — I say “she” identified as a boy and felt that she needed to use the men’s locker room — the boys’ locker room — to change. After gym or after, you know, a sport or whatever, felt that she had every right to go in the boys’ bathroom.

And, to me, that was appalling. That is unacceptable. And I encourage you, by the way, to call or maybe talk to the superintendent… of the school… Talk to somebody. If you’re not in favor of that… I think that our voices need to be heard. Amen? Everybody with me? Amen!

I don’t think I need to go into details here!

I went through my scrapbook that my mom had put together when I had graduated high school… It had all kinds of memories of my life, all the different things I had been through. My first hunting license. My first book report. Just all kinds of stuff. My baby book was in there. And pictures I drew when I was just a child, you know, was in there. And I came across one particular paper that I felt pretty good that, eight years old, I had it all figured out! It said… it had a checklist. It said, “My eyes are,” and I wrote “blue.” “My hair is” and I wrote “brown.” “I am,” you know, and I put how tall I was… And it said boy or girl? And I said boy! I had it figured out at eight years old! And I don’t think I even needed anybody to tell me! I just — I knew! Amen! And, of course, that had to be confirmed. Amen. [Laughs] Amen. Somebody look for confirmation. Amen. I can help you. Somebody can help you with that. Amen.

But you know, the structure of the family is being shaken! Now here’s the… all that’s bad enough. But to me, this crosses the line.

Imagine being a pastor projecting strength while complaining that his world has been shaken up because a teenager wanted to use the proper bathroom.

Perry also allegedly “encouraged the kids that attend his church to harass this boy,” according to the Facebook poster.

After that sermon went up on September 5, a few people have since protested with signs outside the church and criticized the church online.

It led the church’s associate pastor, Mark Bailey, to issue a response video last week… And I say “response” because it sure as hell wasn’t an apology. In fact, Bailey says:

We welcome all people from every walk of life to join us in pursuing God. This, of course, is balanced with an unwavering desire to walk in righteousness according to the principles of the Word of God. We love everybody. It is our sincerest desire to join with each and every one of you as we all discover, together, the best and truest versions of ourselves. Which is only found in Christ Jesus, Our Lord.

The “truest versions of ourselves” is Christianese for “Trans people don’t exist.” The whole video is just bigotry with a smile. They have no awareness about how their hate speech won’t change a student’s gender, but it will absolutely make that student’s life worse. But that’s what they want to see. They think harassment in the name of Jesus will force that kid to magically switch genders. It’s Christian cruelty rearing its ugly head again.

(Thanks to Vivian for the link) 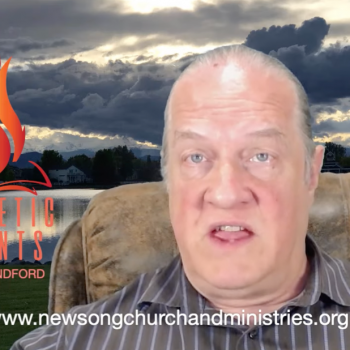 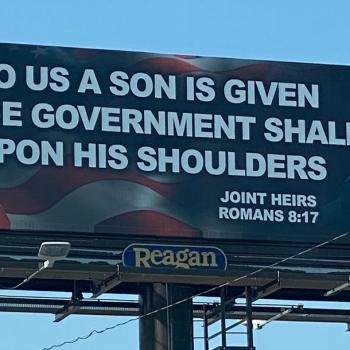 September 18, 2021 A Pro-Trump Billboard with a Bible Verse Didn't Even Get the Bible Verse Right
Browse Our Archives
What Are Your Thoughts?leave a comment