I cannot believe we have to have this conversation again.

When Donald Trump was in office, many conservative Christians claimed Trump was a lot like the biblical king Cyrus. As the myth goes in Isaiah 45, Cyrus was the former Pagan emperor of Persia who freed Jews being held in captivity. Essentially, he was a non-Christian who God supposedly put in place to help the faithful. No wonder Christians loved the comparison. (See? Isaiah 45! The 45th President! CONNECT THE DOTS, SHEEPLE!) It was such a desired connection that some evangelicals sold coins with Trump on one side and Cyrus on the other.

Now look at what’s happening when a wannabe Trump runs for office.

Josh Mandel is the former Ohio lawmaker and State Treasurer running for the Republican nomination to the U.S. Senate on a platform of just plain being a MAGA cultist who thinks the Bible should govern everyone’s lives.

On Saturday, at a 9/11 memorial event held at Calvary Church in the city of Hamilton, Mandel was introduced by a fellow right-wing politician Candice Keller (who has her own disturbing history of blaming mass shootings on “homosexual marriage and drag queen advocates”).

Keller made the same connection to Cyrus:

“Josh Mandel is going to go to the Senate,” Keller declared. “Just so you know, he’s going. He’s going. Now, when he gets there, I know he’s only going to be one of 100, but God said, ‘I searched for one man so I would not have to judge a nation.’ And just like Donald Trump, God is raising Josh Mandel up to be our Cyrus in Ohio. Ohio is the most significant state in the nation, in my opinion. God is going to place Josh in a strategic place, and I believe he’s in it.”

She also noted that Mandel is 43 years old… like King David. So… there you go. Another connection. This must be what God wants.

It’s telling that these people never argue that their people should be elected because God wants them to help the poor, expose and prevent corruption, fight for racial and social justice, speak on behalf of minorities, etc. It’s always because of some arbitrary, flimsy, pointless link.

It’s a lot easier to call theocrats like Mandel “Cyrus” — using what basically amounts to coded Christian language — than to just brag about what Mandel would like to do if he wins. Because he’s openly admitted his desire to use the government to impose Christianity upon everyone else.

Unlike Cyrus, he wouldn’t help the Jews. He doesn’t care about any non-Christians. He would love to crush them all under the weight of his Christianity. 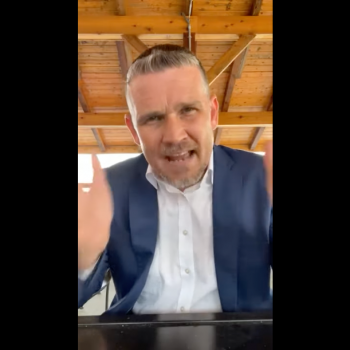 September 15, 2021 Conspiracist: When Trump Is Reinstated, "I Wouldn't Be Surprised If Q Returns"
Browse Our Archives
What Are Your Thoughts?leave a comment