Texas Governor: To Reduce Crime, “We Need to Restore God in Our Communities” September 14, 2021 Hemant Mehta

Texas Governor: To Reduce Crime, “We Need to Restore God in Our Communities”

After effectively banning abortions in Texas, and after pledging to “eliminate rape” (as if that’s something that can be done… and something he never got around to until just now), Gov. Greg Abbott argued that crime could only be stopped with God.

It was part of yet another awful law making it more difficult for alleged violent criminals to raise bail before their trials.

Gov. Greg Abbott (R-TX) speaks before signing bail bill requiring people accused of violent crimes to put up cash to get out of jail:

“We need better parenting … We need to restore God in our communities. If we do that, we will be able to reduce crime in this region.” pic.twitter.com/QYyQ2lABoq

We need better parenting, greater parental involvement. We need to restore God in our communities. If we do that, we will be able to reduce crime in this region.

As I’ve noted on this site before, atheists make up only 0.1% of the federal prison population — though many other factors obviously come into play and I wouldn’t use that number to suggest atheists are incapable of crimes.

But when you’re a Christian Nationalist governor, pandering to a gullible Christian base, lying in the name of Jesus is always acceptable. It’s not like the rubes you’re appealing to have the guts to call you out on it. You’re not gonna find any Texas megachurch preachers fact-checking Abbott on this lie. They’re all cowards and none of them care when their guy slanders non-Christians.

By the way, if Abbott actually wanted to reduce crime, then keeping people out of poverty is one surefire way to do it. So is gun control. He has no intention of taking those paths. The very law Abbott signed yesterday means poor people charged with a violent crime will have a harder time of seeking justice than rich ones.

It’s a bad law passed by a heartless Republican legislature and signed by a thoughtless governor. 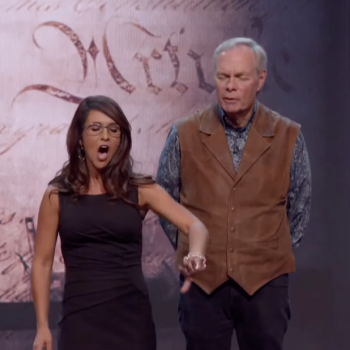 September 14, 2021
GOP Lawmaker to Christian Crowd: Pray to Jesus to "Unwoke These Generals"
Next Post