Lahmeyer is not a smart person is my point. Which is why it shouldn’t surprise anyone that he’s getting endorsement from people who hold even more despicable views.

During a campaign rally this week, failed Republican candidate and self described “patriot” Jarrin Jackson said openly fantasized about how military tribunals would eventually send “godless commies” to Hell.

I told God anytime I got a platform and a microphone, I would preach the Gospel. I care most about Jesus Christ. I don’t want anyone to go to Hell. If you believe in the death, the burial, the resurrection of Jesus Christ as the only way to go to Heaven, you will go.

Unlike these godless Commies who reject Christ, they will burn forever in a lake of fire. And, Lord willing, we will send them, through military tribunals, heels a-clackin’ all the way, to meet their Creator.

Nothing like conducting a voter outreach campaign by threatening non-Christians with eternal torture. That’s the Christian Way™.

The scary thing is that this is such a standard part of Republican campaign rallies nowadays that it likely won’t affect Lahmeyer’s candidacy at all. In a more civilized country, this sort of campaign event speech would wreck a campaign — or, at the very least, require Lahmeyer to distance himself from the insane rhetoric of the preacher. It won’t happen here. 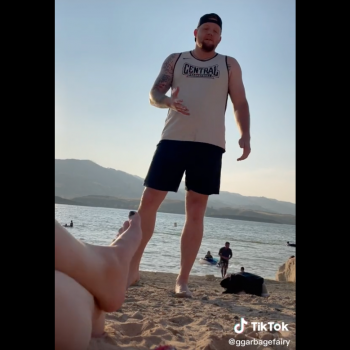