Monica Cole, the one mom at One Million Moms (Twitter count: 4,138), is currently at war with Gillette Venus.

The Christian Right group known for constantly complaining about any and every culture war issue — and a bunch they just made up out of nowhere — is furious that a recent ad for the razor company is aimed at women who want to remove their pubic hair.

The current “How to Shave ‘Down There'” commercial by Gillette Venus shows a woman explaining and demonstrating how to shave her bikini line. While the woman is posing in her shaving position the camera zooms in for close-up shots of her bikini line as she discusses shaving between her legs. The advertisement features several shaving products by Gillette and a new razor designed for this purpose. The ad concludes with the woman stating, “Fancy skin care for my pubic hair? Yes, please!”

This inappropriate commercial is airing during prime time when children are likely watching television so family viewing time is ruined. It is so suggestive it’s disgraceful. Can you imagine what goes through the mind of a child when he sees this ad?

Gillette chose to air this commercial knowing it would be controversial. We all know children repeat what they hear. Gillette should be ashamed!

First of all, that two-minute “commercial” isn’t a commercial! It’s a tutorial. As far as I can tell, they’re not airing that entire thing on television. There is a different ad that’s only 15 seconds long focusing on the same topic, but that’s not the one mentioned by name by Cole. (She notes in her complaint that the last line in the ad is “Fancy skin care for my pubic hair? Yes, please!” That line only appears in the two-minute tutorial.)

The tutorial isn’t even recent. It went up on YouTube back in February. Why did it take so long for Cole to hear about it?! Either it wasn’t a big deal for seven months or Cole’s lag-time for Christian fury is getting longer.

And what the hell is she talking about regarding kids? Kids don’t even watch commercials, first of all. But even if they did, there’s nothing controversial about this ad. It’s almost comically dull. It’s not sexual. It’s not suggestive. It’s pretty much the only way you can talk about this product and demonstrate how to use it without showing actual body hair.

If your kids did see it, so what? It’s not a big deal. You tell them some people like shaving their body hair. If that conversation is too complicated for you, then you’re not ready for parenthood.

Cole has clearly given up on finding anything actually outrageous, so she’s now going after products aimed at adults whose ads dare to mention what the products do.

Conservative Christians are so desperate to act like they’re saving the children, that merely acknowledging the realities of adulthood is now seen as too traumatic for kids. It’s the result of an organization that doesn’t need to exist and a mother who has nothing of substance to whine about. 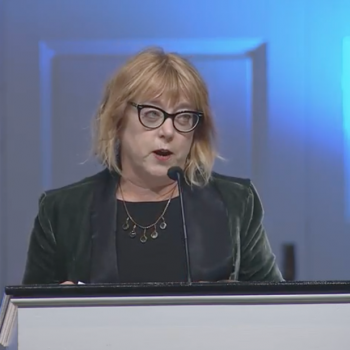 September 11, 2021
Irresponsible NYT Essay Defends TX Abortion Law As a Way to "Teach Us to Love"
Next Post

September 11, 2021 GOP Activist Lauren Witzke: The COVID Vaccine is a "Mass Death Scale Injection"
Browse Our Archives
What Are Your Thoughts?leave a comment