These Are the Best Ways to Talk Sense to a Science Denier September 6, 2021 Rebekah Kohlhepp

It seems that now, more than ever, science denial has become a poison to society which leaves nothing untouched. With the rise of the anti-vax movement and the denial of climate change at a time when accepting the science means the difference between life or death, being able to unravel and dismantle science denial is more important than ever.

That’s what led Lee McIntyre, a Research Fellow at the Center for Philosophy and History of Science at Boston University, to write How to Talk to a Science Denier: Conversations with Flat Earthers, Climate Deniers, and Others Who Defy Reason (MIT Press). It could not have come at a better time. 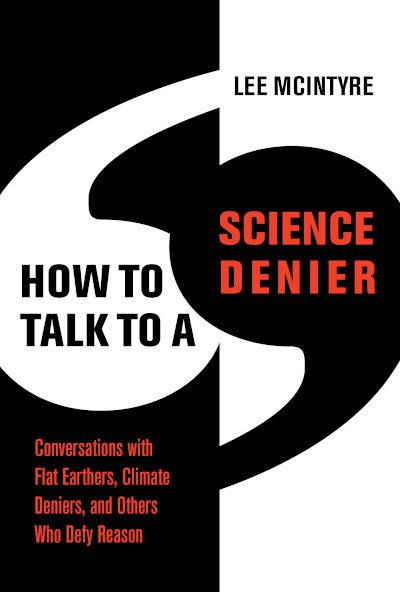 The book covers all kinds of science denial of paramount importance while offering a peek into McIntyre’s own experience at a Flat Earth convention. It’s not entirely partisan either; readers will see that liberals can also be guilty of science denial. But the most important part of the book is right there in the title: How can we change someone’s mind? As described in the following excerpt, sometimes the answer involves using compassion rather than insults.

Here are a few key things to remember before an encounter with a science denier:

1. Science denial exists on a spectrum

If we lump all science deniers together, our task may seem impossible. But there are varying degrees of knowledge and commitment. With anti-vaxxers, for instance, one of the best pieces of advice might be to stop thinking of them all as anti-vaxxers. (And, when speaking to them, we should remember that it is an insult to use the word “anti-vaxxer.”) In one Canadian study, it was estimated that hard-core anti-vaxxers make up only 1 to 3 percent of the population, whereas the “vaccine hesitant” make up another 30 percent. Obviously, the latter would be easier to convince.

The same is surely true for climate change. One article from the Yale Climate Connection advises that the first step in trying to convert a climate denier should be to differentiate those who are persuadable from those who are not. On the “spectrum of persuadability” they list: informed but idle, uninformed, misinformed, party-line followers, ideologues, and trolls. Obviously, as we already know from Schmid and Betsch’s study, the earlier we can get to someone, the better chance we might have. Shall we start with the informed but idle, then work our way through the party-line followers? Since our energy and resources are not limitless, why not focus on where we might do the most good?

But didn’t we just get done recounting examples which show that conversion of the hardest of the hard core is possible too? Isn’t it worth some effort to try to reach out to the ideologues and trolls? Certainly so, due to their outsize influence.

Even if there are very few actual hard-core science deniers, they are quite noisy. As one former anti-vaxxer put it:

Anti-vaxxers have been around for a long time, but social media makes it easier to get into a loop. And once you’re there, it’s hard to see outside of it. Algorithms just show you more of what you’re already looking for. If you start searching anti-vaccination stories, that’s what starts popping up on your tagline. You start to think, “Oh, my God, there’s all these people and there’s so much going on.” But if you have a chance to peel back from that, you see that it’s actually a very small portion of the population who are really, really loud. The fear makes you angry and it makes you lash out. Once you get into that state, it’s easy to stay there.

The spread of science denial may seem bigger than it is, especially if hardcore ideologues are driving the agenda. In The Conspiracy Theory Handbook, Stephan Lewandowsky and John Cook offer some sage advice about how best to talk to a conspiracy theorist — by showing empathy and avoiding ridicule — then offer this gem:

Conspiracy theorists also have an outsized influence despite their small numbers. An analysis of over 2 million comments on the subreddit site r/conspiracy found that while only 5% of posters exhibited conspiratorial thinking, they were responsible for 64% of all comments. The most active author wrote 896,337 words, twice the length of the Lord of the Rings trilogy!

Given this, it may be especially worthwhile to occasionally try to engage with the most committed science deniers, for once you have found the (perhaps small) source of disinformation, maybe it can be neutralized. It is also important to remember the shallowness of the disinformation pool. If you engage in some simple interactions with less-committed folks to present information that they aren’t hearing from the superspreaders, perhaps you might have a chance to stop more people who start out as questioning but end up as deniers.

Even if you think you have made a successful conversion, you can’t just walk away. Again, we can learn from prior research on converting political beliefs. One study found that:

There was a large bipartisan shift in belief after the fact check, suggesting that both conservatives and liberals can change their minds if they’re presented with convincing unbiased information. But there was a catch: After a one-week delay, subjects partially “rebelieved” the false statements and partially forgot that factual information was true… “Even if individuals update their beliefs temporarily, explanations regarding both fact and fiction seemingly have an expiration date.”

Updating someone’s beliefs based on a fact-check may seem like progress, but full conversion is not just a matter of overcoming an information deficit. The hard work of identity change awaits.

And we know that some people can change their minds based solely on evidence. Remember Kuklinski’s study, which talked about hitting people “between the eyes”? In 2016, James Cason became the Republican mayor of Coral Gables, Florida… and within three days he changed his mind about whether climate change was real. He said, “You know, I’d read some articles here and there, but I didn’t realize how impactful it would be of the city that I’m now the leader of.” Apparently the problem was this: Coral Gables is a wealthy town that has 302 yachts, many of which are anchored at their owners’ homes. But there is a bridge between these homes and open water. With climate change, the water level had begun to rise and people were having trouble getting their boats out under the bridge. As Cason observed, “These are $5 million homes with nice boats that suddenly see their property values go down because they can no longer get a boat out. So that will be one of the first indicators [of sea level rise], and a wake-up call for people.” Ideology is one thing; not being able to get your boat out of the harbor is apparently an emergency.

Later, along with Miami mayor Tomas Regalado, Cason penned an op-ed that appeared in the Miami Herald just before one of the Republican presidential debates. It read in part, “For us and most other public officials in South Florida, climate change is not a partisan talking point. It’s a looming crisis that we must deal with — and soon.”

When self-interest is at stake, people can change their minds fast. Farmers and fishermen now seem to be coming around to accepting the reality of climate change. And even some anti-vaxxers are changing their views due to growing fears about the coronavirus. It’s one thing to be anti-vaxx when a disease like measles is relatively rare, and you may not know anyone who has had it; it’s another thing to face a life-threatening pandemic with no protection. According to one former anti-vaxxer, “I was just as scared of vaccines as I was of the diseases they protect against… [But] since COVID-19, I’ve seen firsthand what these diseases can do when they’re not being fought with vaccines.”

All of this is admittedly anecdotal, but it is still important. The stories of how actual science deniers are converted bear too close a resemblance to one another to be dismissed. In virtually every account I’ve read, anti-vaxxers, climate change deniers, or other ideologues who have changed their minds have done so on the basis of face-to-face encounters, where evidence was presented by someone with whom they had a trusting relationship. Kindness, empathy, and listening work. These are the keys to helping someone to change their beliefs because they are the route to helping them reshape their identity. And they are also the means by which you might be able to hold the attention of a science denier long enough to work in your data and take care of any information deficit.

How to Talk to a Science Denier is now available online and in bookstores. 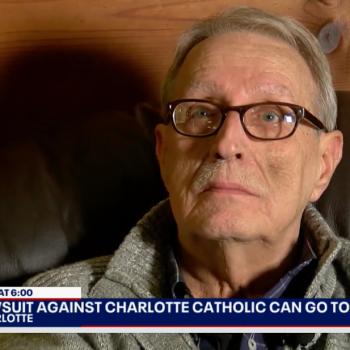 September 7, 2021 Mom Beats Up Catholic Preschool Teacher After Seeing Her Son Physically Abused
Browse Our Archives
What Are Your Thoughts?leave a comment