In South Carolina, where COVID remains strong while vaccinations remain relatively low, the Dorchester District 2 School Board recently voted for a district-wide quarantine that will require kids to stay home, turn on their computers, and take classes virtually for seven school days (September 7-15). They had to take that step because too many students and teachers have to stay home anyway due to COVID:

The latest numbers show more than 20 percent of the student body is out with COVID or in quarantine as a close contact. On Wednesday, the district logged 264 staff absences. While not all of them had COVID, many were out because a family member had COVID.

The impact of the Delta Variant goes beyond the 5,085 students who are missing out on class right now. District officials say nursing staff is burning the midnight oil trying to finish daily contract tracing while battling a staff shortage and an average of 10 daily callouts.

As the board made that tough decision, however, one member walked out of the meeting. Barbara Crosby wanted in-person schooling no matter what, and she was apparently livid that wasn’t even an option on the table.

Live 5 News anchor Raphael James later did an interview with Crosby in which he (politely) tried to get a simple answer out of her: If COVID is a serious threat, how can she support leaving kids in school no matter what?

It was a 22-minute interview that’s just constantly infuriating because it’s clear she doesn’t care who gets sick or killed from the virus. She thinks in-person learning must occur, and if students or adults catch the virus, so what? There’s one little segment at the end, however, that’s just jaw-dropping. It occurs at the 20:30 mark:

CROSBY: … Now, I hope and pray that our kids don’t get deathly ill or we don’t lose any children, but you know what? That’s not my… that’s up to God.

[JAMES: Say that one more time? It sounded like you said that’s not your concern. I just wanted to make sure…]

CROSBY: No, I didn’t say concern. I said that’s not gonna be my decision… It’s gonna be… I mean, God decides who lives and dies, right?

This is the rhetoric of a deranged person who belongs to a Christian death cult.

There’s a deadly virus out there, and we know how to protect against it. Teenagers and adults can get vaccinated. Everyone can wear face masks. Those two things combined are incredibly effective at preventing the spread of the virus.

Crosby doesn’t want a mask mandate. She doesn’t want social distancing. She wants everyone to gather in classrooms, where the virus can (and has already) spread. And when questioned about the lack of logic in that decision, her response is that everything is in God’s hands.

She is the one who wants to put people in harm’s way. She is the one who doesn’t care if people live or die. She has no business blaming God for what’s actually her irresponsibility. It’s appalling that someone that selfish and ignorant got elected to a school board.

If she actually wants to prevent kids from getting “deathly ill” or dying, hope and prayer won’t help. There are tangible steps she can take — and she’s choosing not to. Her Christianity could lead to other people’s death. Someone that thoughtless shouldn’t be in a position of power.

(Thanks to @GodlessEngineer for the link) 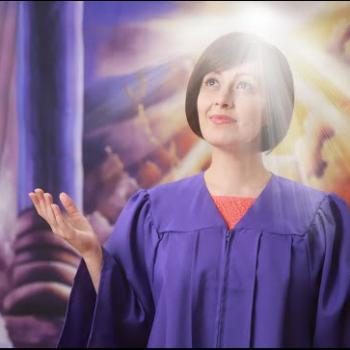 September 2, 2021
"He Flies": The Gospel Song About the Flying Spaghetti Monster We Need Right Now
Next Post