Christian Preacher: I Was in the Hospital with COVID, But Prayer Alone Cured Me September 1, 2021 Hemant Mehta

Christian Preacher: I Was in the Hospital with COVID, But Prayer Alone Cured Me

Christian evangelist Mario Murrillo, who claimed in 2020 that God sent Donald Trump to “save” people from Democrats and that none of the Capitol rioters “were Trump supporters,” caught COVID not too long ago. In fact, as far as I can tell, it happened last month.

It was so bad he had to go to the hospital. But once he got there, the COVID just went away. As he explained on the show Flashpoint yesterday, the cure had everything to do with his prayers.

Preacher Mario Murrillo says he was recently in the hospital with COVID, but his prayers fixed everything. ("The doctors couldn't explain it.")

I repeat: He was in the hospital… with doctors… and medicine. pic.twitter.com/0x7Z2ZMJb5

… I had to go to the hospital. And it was finally there that a raging fever and nausea and flaming agony like I’ve never known. They said “You have COVID.” But here’s what I did: Once in my hospital room, I started confessing the Word of God over and over and over and over again. And I said, “Devil, you’re a liar!” And the doctors couldn’t explain it.

And it was God speaking to me, saying, “If the Army of God will wake up and refuse to accept the curses of the enemy, they will see a great revival.” What happened to me physically in my healing is a miracle sign of what we’re gonna see in the state of New York [during an upcoming revival event].

Somehow, God didn’t prevent Murrillo from needing to go to the hospital in the first place.

It’s even more incredible that Murrillo spent days in a hospital where the doctors did absolutely nothing to care for him since prayers alone solved his problem… at least according to his version of the story. (Let’s see that medical bill, Mario.) Was he given no antibiotics? No medicine? Was no one monitoring his vital signs?

If prayer alone has this power to heal, why have many of the 630,000+ people who have died of COVID so far — with many more on the way — been professing Christians?

Or maybe Murrillo is just a Christian liar selling a fake story in order to draw people to an upcoming Christian revival meeting where he will gladly accept their donations.

By the way, Murrillo says he was diagnosed with COVID immediately after he led a recent revival meeting… and yet in a clip of that event played on the Flashpoint broadcast, no one in the crowd appears to be social distancing or wearing masks. And if they’re listening to a grifter like Murrillo, odds are many of them aren’t vaccinated either.

While Murrillo encouraged people to pray for healing, nowhere in the interview did he urge people to wear masks or get their shots. 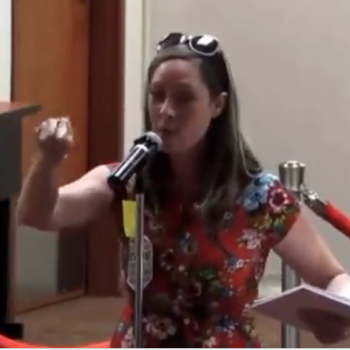 September 1, 2021
Anti-Mask Christian Nurse in FL to School Board: "You Are All Demonic Entities"
Next Post

September 1, 2021 California Settles Case with COVID-Denying Church Whose Pastor Caught COVID
Browse Our Archives
What Are Your Thoughts?leave a comment