Yesterday, the Ohio State House Health Committee held another hearing on HB 248, a foolish piece of legislation that would ban mandatory vaccinations and vaccine status disclosures. It’s basically a Republican-fueled attempt to make sure COVID spreads as much as possible throughout the state by giving the most ignorant citizens the ability to evade the vaccine as well as accountability.

But that bill’s not exactly the story here. During the hearing, dozens of people voiced their support for the bill for all kinds of anti-science, conspiracy-driven reasons. One of them was Father Gabriel Lavery, a man who appeared to be a Catholic priest. His submitted testimony argued that vaccine “requirements should simply be forbidden as a violation of human rights.”

When he was done, he took questions, and he was asked how he squared his position with that of Pope Francis, who supports vaccinations. That’s when things went off the rails.

Gets asked about the Vatican supporting vaccines. Pastor replies that he doesn't recognize Pope Francis as the pope.

"You have to be Catholic to be pope."

… That goes down to, first of all, to deeper religious questions, as Francis on many occasions has contradicted Catholic teachings. I certainly don’t recognize him as pope. You have to be Catholic to be pope. But I don’t think that’s what we’re here to discuss today…

Oh really? Because that’s all I want to discuss now.

Actually, his response shouldn’t have surprised us because Lavery isn’t an official Catholic priest. He’s part of a movement called Sedevacantism that rejects the current pope as a legitimate heir to the throne, if you will, because of the Church’s move toward modernism. They broke away after Pope Pius XII died in 1958.

Lavery himself runs the Sacred Heart of Jesus Church in Akron, which is part of an organization called the Congregation of Mary Immaculate Queen (CMRI, using a Latin translation).

He wasn’t pretending to be someone he’s not, but no doubt he was willing to let lawmakers assume he represented Church leaders — at least until he gave away the game.

For now, the bill isn’t going anywhere. It has plenty of opposition from Democrats, scientists, sane people, and even traditional Republicans who don’t want the government telling businesses what they can or can’t do for the sake of their companies. If the bill passes, it would be a disaster for the state, inevitably leading to Florida-like conditions. 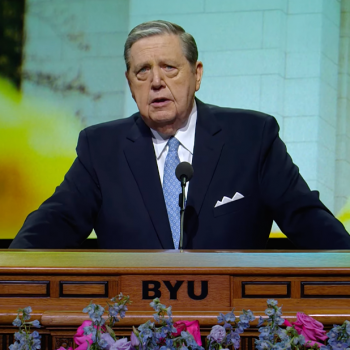 August 25, 2021 Mormon Apostle Chastises Brigham Young Univ. for Not Being Sufficiently Anti-Gay
Browse Our Archives
What Are Your Thoughts?leave a comment