Two years ago, Matt Easton graduated from Brigham Young University’s College of Family, Home, and Social Sciences as the class valedictorian. That meant he would speak at the commencement ceremony, and he made the most of it: He used the opportunity to come out as gay.

That was undoubtedly a courageous and difficult thing to do, in part because BYU is considered one of the most homophobic colleges in the country to the point where its bookstore once removed congratulatory same-sex wedding cards from the shelves lest people think they supported such relationships.

Still, I remember being troubled by all the praise Easton received after that in part because he wasn’t about to leave the Mormon Church. As a gay man who was also a practicing Mormon, Easton was locking himself into a life that demanded celibacy, forbade any kind of same-sex relationship (much less a marriage), and blocked off any route to ordination in the LDS Church (if that was something he ever wanted). He knew all that, though. And it’s his life. So my concerns admittedly didn’t mean much.

I bring all that up because Latter-day Saint apostle Jeffrey R. Holland — one of the highest ranking members in the Mormon Church — spoke at BYU on Monday during the school’s 2021 University Conference and used his speech to double down on the anti-LGBTQ bigotry of the religion. Holland called out all those people, including faculty members, who weren’t enthusiastically cheerleading for all the anti-gay beliefs.

My beloved brothers and sisters, “a house divided against itself… cannot stand,” and I will go to my grave pleading that this institution not only stands but stands unquestionably committed to its unique academic mission and to the church that sponsors it. We hope it isn’t a surprise to you that your trustees are not deaf or blind to the feelings that swirl around marriage and the whole same-sex topic on campus…

… If a student commandeers a graduation podium intended to represent everyone getting diplomas in order to announce his personal sexual orientation, what might another speaker feel free to announce the next year until eventually anything goes? What might commencement come to mean — or not mean — if we push individual license over institutional dignity for very long? Do we simply end up with more divisiveness in our culture than we already have? And we already have too much everywhere.

… Yes, we will always need defenders of the faith, but “friendly fire” is a tragedy — and from time to time the church, its leaders and some of our colleagues within the university community have taken such fire on this campus. And sometimes it isn’t friendly — wounding students and the parents of students who are confused about what so much recent flag-waving and parade-holding on this issue means.

That’s a very long way of saying Holland and the Mormon Church he represents are opposed to anything LGBTQ. He opposes their rights, he opposes people who are their allies, and he opposes openly gay people who aren’t ashamed of their LGBTQ orientation… even when they aren’t violating Church doctrine.

Holland using his speech to attack gay people is far more of a problematic commandeering of an event than anything Easton did two years ago. He literally blamed people like Easton for stoking divisiveness, fully ignorant of how the anti-gay Church has exacerbated this division by insisting that bigotry must win out. (The Church defended racism the same way until that stance became indefensible.)

It’s not just rhetoric either. Holland also suggested that the school should always stick to its anti-gay beliefs even if it costs them “professional associations and certifications.” That belief could be detrimental to graduate students and athletes since professional certifications and postseason eligibility may not be available to students who attend schools that practice discrimination.

To his credit, Easton stood up for himself when asked about Holland’s remarks:

“I am proud of what I did two years ago,” he responded Monday, “and I stand by what I said.”

… “I wasn’t trying to grandstand or ‘commandeer’ the event. I drew on my personal experiences because they shaped my time at BYU — authenticity is not the same as ‘agenda pushing.’”

Ironically, Holland’s speech was delivered the same day that BYU announced a brand new “Office of Belonging” meant to help students who face “prejudice of any kind, including that based on race… and sexual orientation.”

It’s hard to imagine BYU taking the problem that seriously when they’re inviting a bigot like Holland to address the school — even if he’s a Church leader and even if he’s a former BYU president. It’s also tough to say people who disagree should just leave Mormonism; it’s never that simple. Much like practicing Catholics, there are people who believe the Church is a force for good despite the misguided beliefs of its leaders, and there are so many things keeping them in the fold that have nothing to do with the beliefs themselves.

If there’s any hope here, it’s that a lot of students and graduates are well aware of the institutional bigotry — and disagree with it — and they know that things keep improving no matter how hard the elderly men in charge try to pull everyone back. As one graduate told the Salt Lake Tribune, he’s heard plenty of speeches like the one Holland gave, “yet things only keep getting better.” 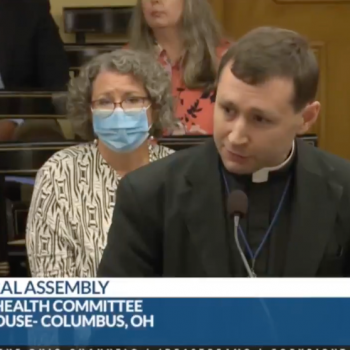 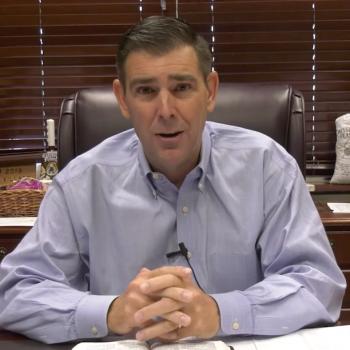 August 25, 2021 A Mississippi State Commissioner's COVID Solution: "Now Is the Time for Prayer!"
Browse Our Archives
What Are Your Thoughts?leave a comment