While Sitting in Jail, Head of “Bleach Church” Continues to Spread COVID Lies

Over the past year, we’ve posted multiple times about the Florida-based Genesis II Church of Health and Healing, which basically sells bleach as a cure for everything. In May of 2020, the group’s Australian chapter was slapped with a $150,000 fine for “selling and promoting a solution containing sodium chlorite, a chemical used as a textile bleaching agent and disinfectant.”

The family behind it was indicted for fraud and criminal contempt earlier this year.

The group’s leader, Mark Grenon, admitted in the past that he didn’t run a church at all; that designation only existed to avoid government oversight.

Whatever it was, though, it had an audience, which meant it could cause a lot of damage. Last August, the U.S. Food and Drug Administration issued a warning against using the products because they were deemed life-threatening.

And last July, government officials raided the “church” headquarters in Bradenton, Florida and confiscated everything inside, including 22 gallons of “Miracle Mineral Solution” (MMS), 8,300 pounds of sodium chlorite, and 50 gallons of muriatic acid. All of that was destroyed, per a court order.

The order also said that the group’s websites, which sold the products, had to be taken offline immediately.

Grenon and his sons were eventually charged with “conspiracy to defraud, conspiracy to violate the Federal Food, Drug and Cosmetic Act, and criminal contempt.” Two of the sons were arrested. And then, in April of this year, the Department of Justice announced that a federal grand jury in Miami had returned an indictment against Grenon and his three sons:

As it stands, Grenon is currently in a prison cell in Colombia awaiting extradition to the U.S. to face trial.

But according to the Guardian, none of that has stopped Grenon from continuing his grift:

The Guardian has learned that Mark Grenon, who calls himself the “archbishop” of the Genesis II “church”, is distributing bleach to at least 75 other prisoners in La Picota penitentiary in Bogotá, where he is being held captive. He has revealed that he is obtaining the product through secret channels and that the chemicals are in plentiful supply in the jail.

“You can’t get it on the outside, but we got it on the inside,” he said in a phone call, a recording of which has been heard by the Guardian. He added that more than 75 prisoners were taking the “cure” as a remedy for a range of ailments including diabetes and gastritis.

Even in jail, he’s a threat to the people around him. He’s apparently got access to a phone, which means he has access to Facebook and Telegram, two outlets he’s using to sell his products and spread harmful medical advice:

Despite his incarceration, Grenon remains a powerhouse of medical misinformation. He circulates anti-vaxxer videos attempting to dissuade people from getting vaccinated against Covid.

He also continues to encourage parents of children as young as six who have been infected with Covid to give their kids baths in bleach solution and to make them swallow bleach powder in capsule form as a purported remedy for the illness.

“Children do pretty good,” he said in one exchange with a parent of a six-year-old. “Give the child two or three drops [of bleach] every couple of hours.”

Can you send a man in jail to jail? When he’s eventually brought to trial, let’s hope his continued faith-based cruelty is taken into account and he’s punished in such a way that no one will be misled because of his greed and corruption.

(Large portions of this article were published earlier. Thanks to Bob for the link) 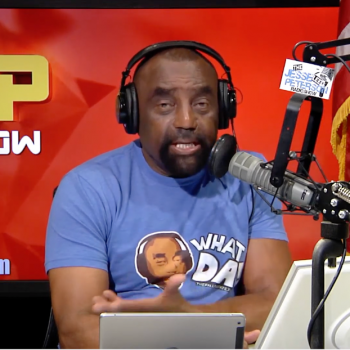 August 12, 2021 Jesse Lee Peterson: During the Insurrection, AOC May Have Wanted to Get Raped
Browse Our Archives
What Are Your Thoughts?leave a comment