For a couple of years, Charlie Specht, a reporter for WKBW-TV Eyewitness News in Buffalo, New York, was on top of the Catholic Church’s sex abuse scandal beat as it concerned the Buffalo Diocese. He was good at it too; his reporting on how Buffalo Bishop Richard J. Malone mishandled sex abuse cases led to Malone’s resignation.

But in February of 2020, Specht received a voicemail that included the threat, “I know where you live… I’m going to find you. I’m going to kill you.”

Specht actually received multiple phone calls from the same number over the course of a few months.

This week, the U.S. Department of Justice announced that a man had pleaded guilty charged in connection with those phone calls:

Specifically, on six separate occasions between August 20, 2019, and February 4, 2020, Lubienecki left harassing and threatening voicemails for Victim 1 relating to the victim’s reporting on the Catholic Diocese of Buffalo, which appeared on Channel 7 WKBW. The defendant left these voicemails with the intent to harass and intimidate Victim 1. Lubienecki used a TracFone cellular telephone with a phone number that appeared as “unknown” when he left these voicemails.

While it’s a relief they caught the guy, the real kicker is who Lubienecki really is: a professor at Christ the King Seminary. I repeat: A seminary professor stalked and threatened a local news reporter for covering the Catholic Church. (Specht had also reported on the closure of this particular seminary.)

When he was first arrested last year, Lubienecki said he wasn’t trying to scare Specht at all:

… [Lubienecki] told reporters that he believes the voicemail messages left for Specht were made in the context of a public debate, not a personal dispute, and therefore may be considered free speech.

I guess he changed his mind. 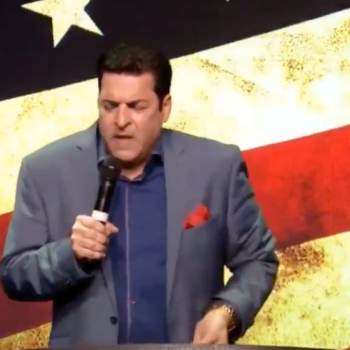