When a Muslim Woman Was Harassed at a Store, Bystanders Came to Her Defense July 29, 2021 Beth Stoneburner

When a Muslim Woman Was Harassed at a Store, Bystanders Came to Her Defense

We post a lot of stories about religious freedoms being violated on this site, so here’s one that’s a bit more uplifting.

When Zardana Bashir was at a grocery store in Santa Monica, California recently, a white woman began harassing her for wearing a hijab. But in a viral TikTok video, other customers began rallying to the Muslim woman’s defense.

Here’s a summary from Upworthy:

… Zardana patiently tried to talk to the White woman, “Can I ask you why you hate me? Just because I am wearing a headscarf?” The White woman continued making racist comments at her and making comments about her hijab.

Customers and employees who got wind of what was happening, stepped up to back up Zardana and told the White woman off. When one Black woman at the store heard what the White woman was shouting, she interjected, saying, “Don’t talk to her like that.” Within no time, the customers at the store had rallied around the Muslim woman. A couple also offered to walk the woman and her son to her car, just to ensure she can leave the store without the fear of being attacked.

Bashir has since released additional videos answering some questions that repeatedly popped up:

It should go without saying that, whatever you think about head scarves in general, no one deserves to be harassed for their faith-based choices, certainly not when those decisions don’t hurt other people. Bashir was minding her own business. She didn’t deserve this, and neither did her child. It’s a sign of humanity’s decency that others in that grocery store came to Bashir’s defense instead of joining the attacker.

Bashir says she plans to take legal action and is raising money for it; she also said she filed a police report against the woman. 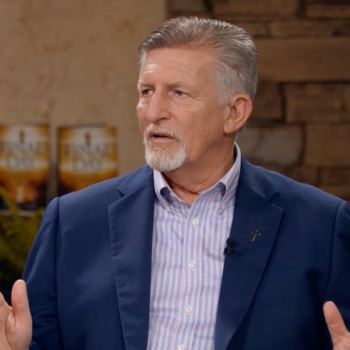 July 29, 2021 Rick Wiles: People Vaccinated with "Satanic Serum" Gave Me COVID
Browse Our Archives
What Are Your Thoughts?leave a comment