Right-wing pundit and professional anti-Semite Rick Wiles has spent much of the past year spreading conspiracy theories about COVID.

He said Bill Gates was using the vaccine to impose the Mark of the Beast upon people and that Dr. Anthony Fauci should be tortured until he confesses that he helped create the virus. When a massive indoor Orthodox Jewish wedding took place in New York City, violating every imaginable health restriction, Wiles said he was going to pay the $15,000 fine on their behalf. He said the vaccines were part of a genocidal plot, but that was fine since “stupid people will be killed off.” When a lawyer who advocated for LGBTQ rights died of COVID, Wiles said it was proof of God’s judgment.

And then, in May, there was a COVID outbreak at Wiles’ ministry. And eventually Wiles got COVID. And then he recovered and blamed everything on Satan.

He’s still not done with the lies. On Tuesday, he blamed the vaccines (a.k.a. “Satanic serum”) for causing his infection.

“You’ve got people who are vaccinated who are shedding the virus, infecting other people, walking around thinking they are protected and yet they are the ones who are spreading the virus to other people,” Wiles said. “I don’t think that there is a variant called Delta. I think it’s a name that they gave the public to explain the explosion of infections caused by the vaccinated people.”

“We’re witnessing for the first time in human history global genocide, compliments of the Church of Satan,” Wiles said later in the program. “The Communist Party is the political arm of the Church of Satan. These people that are running the world are Satanists. They’re killing off massive numbers of people.”

“I’m convinced that my infection and the explosion that we had here in our staff, among my family and friends — 20-some people altogether infected suddenly — I believe it came from a vaccinated person coming into this building who was shedding the virus,” Wiles replied. “I believe that’s how it happened.”

Rick Wiles believes a lot of things that are utter bullshit. It doesn’t mean anyone should take him seriously. He seems unaware that just about all the people currently hospitalized with COVID — facing the worst consequences of the virus — are the unvaccinated.

Vaccinated people may indeed carry the virus and spread it, though the rates are low. But they’re not “shedding the virus” because they’re vaccinated. 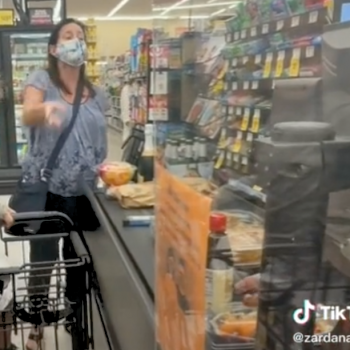 July 29, 2021
When a Muslim Woman Was Harassed at a Store, Bystanders Came to Her Defense
Next Post