Hate-Preacher: If Your Church Takes COVID Seriously, “Find You Another One”! July 18, 2021 Hemant Mehta

Hate-Preacher: If Your Church Takes COVID Seriously, “Find You Another One”!

Over the past couple of days, there’s been a “Health and Freedom Conference” taking place in Anaheim, California featuring a slew of right-wing, Trump-orbit figureheads like Mike Lindell and Michael Flynn who are gathering to spread lies about COVID to a very gullible audience.

Preacher Greg Locke was there, too. The last time we saw him, he said he was going to sue CNN, Newsweek, and the conservative Christian website Pulpit & Pen for defamation… for basically quoting his crazy-talk verbatim. As of this writing, there’s no indication he’s going through with it because — surprise! — he’s a coward who’s all talk, no action, and even he must know he has no legal case.

Since he’s not working on that, though, he had time to rile up the crowd by telling them the government was trying to control them by… protecting them from COVID.

Pastor Greg Locke took the stage at the ‘Health and Freedom Conference’ with some apocalyptic talk, “We cannot compromise! God will never call me a coward! This means war. We’re in a fight!” pic.twitter.com/g9vZZpVMiH

Fifteen months, it’s been a dress rehearsal. And here is what they’ve been experimenting with: Now they know, and they know well, who they can control and who’s gonna be a problem moving forward.

Don’t ever be guilty of God calling you a coward. And so I say to everybody that goes to a church that’s still closed, find you another one.

Your pastor is a coward and you tell him I said so… My book’s not called “How to Win Friends and Influence People.” It’s called “This Means War” because we’re in a fight, church! I said we’re in a fight! Open them doors and open them wide! Let King Jesus come inside.

First of all, most public places are open again. No one’s shutting churches down right now. Does Locke not realize that most churches have been open for a while? He thinks he’s special because he’s been ignoring COVID protocols for well over a year and spreading lies about the vaccine to his congregation — but the responsible churches (with leaders who care about their members) followed sensible suggestions and opened back up in a safe way.

What’s dangerous is Locke’s claim that a church that remains closed out of safety concerns is somehow cowardly and worth leaving. Notice that he’s not making a biblical argument here. If church leaders care about their congregations, urge them to get vaccinated, and switch to live-streamed services instead of in-person ones, Locke thinks they’re somehow disappointing his God. But Locke, who wrongly thinks yelling something makes it more true, believes God is only happy if a pastor is killing off his congregation one by one.

He keeps saying “We’re in a fight,” but the enemy isn’t the government. Locke’s fighting against vaccines and safety protocols. He wants to lead his cult off a cliff and he won’t stop no matter how many people die because of his negligence. 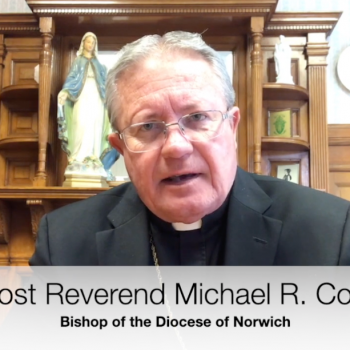