Hate-Preacher: If Evolution’s True, There’d Be “No Such Thing as Homosexuality” July 17, 2021 Hemant Mehta

Hate-Preacher: If Evolution’s True, There’d Be “No Such Thing as Homosexuality”

Pastor Jack Hibbs of Calvary Chapel Chino Hills in California, who argued last May that two months of abiding by lockdown orders was enough and then hosted an in-person baptism for over 1,000 people in September, is also a bigot who thinks trans people don’t exist and that “demonism” leads them to think otherwise.

His ignorance took a different turn in a sermon last week.

“When two people of the same sex get together, it’s out of sheer wanton lust and pleasure only for self,” Hibbs said during his sermon. “Nothing comes of it. No life can come from it. No family can come from it.”

“If you’re an evolutionist, you have to be against same-sex unions,” he continued. “If you’re an evolutionist, what is one of the statements? It’s the survival of the fittest, right? And in evolutionary theory, the survival of the fittest has to procreate. … But if evolution is true, then there would be no such thing as homosexuality, because over the last 400 trillion, billion, zillion, quadbillion, zillion, nillion, years, evolution would have washed that out. Homosexuality — LGBTQ actions — prove the existence of God, because God’s word says this would be some of the outcome and actions of the Last Days.”

Hibbs doesn’t understand that two people of the same sex might want to have sex for the same reason straight people often do: because they love each other. He doesn’t get that sex has a purpose other than procreation. (Everyone take a drink on behalf of Hibbs’ poor wife.)

Hibbs doesn’t understand evolution, either. He thinks it’s a prescription for policy instead of a description of reality. Straight people who are infertile or older can’t have kids either but scientists aren’t opposed to them getting married or having sex either. Why would someone else’s civil rights get in the way of biological realities?

Hibbs doesn’t understand that homosexuality exists in all kinds of species.

Hibbs doesn’t understand. That’s the moral of the story here. He’s not smart. He’s a pastor who thinks that title makes him an expert on topics he knows nothing about. The sad thing is that thousands of Christians are gullible enough to believe his faith-based rants and our world is worse off because of their mindless acceptance of his hate.

July 17, 2021
Driver Who Let Jesus Take the Wheel Before Crashing Wanted to "Test Her Faith"
Next Post 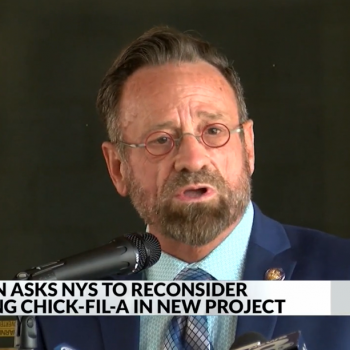