Here’s the backstory: Students in Maine are guaranteed free public education until they graduate high school. But in some rural parts of the state, where there are no local schools, students have the option of attending a private school on the state’s dime (as long as they’re accepted). State law, however, mandates that those schools must be secular. Taxpayer money can’t be used to pay tuition at a religious school. Makes perfect sense.

But a few years ago, three sets of families represented by the (Libertarian) Institute for Justice and the (conservative) First Liberty Institute sued the state because they claimed it was illegal for the state to deny funding to the Christian schools the students wanted to attend. Their schools met every condition laid out by the state for a tuition reimbursement… except for the religion part. (Amy and Dave Carson are among the parents involved in the lawsuit, and Maine’s Commissioner of Education is Pender Makin, so the case is called Carson v. Makin.)

The Christians lost an earlier version of this case, but in 2020, the Supreme Court threw them an unexpected lifeline. The conservative majority decided a case called Espinoza v. Montana Department of Revenue in which they said that taxpayer funding could subsidize private religious education. In fact, if states offered funding for private schools at all, they may have to extend that offer to private religious schools, too. (It depended on the kind of funding program the state offered.)

With that in mind, the conservatives sued again… and lost. Then they appealed… and lost. In fact, the U.S. First District Court of Appeals didn’t buy their argument at all. They said the schools those families wanted to attend discriminated against LGBTQ people and required teachers to accept Jesus. One school even made employees sign a statement saying “God recognize[s] homosexuals and other deviants as perverted.” In other words, these weren’t just regular schools owned by churches; these were schools that existed to promote a certain ideology.

One of the judges even said the Maine program was acceptable because it only denied subsidies if the school’s educational program was explicitly religious. Judge David Barron wrote, “Sectarian schools are denied funds not because of who they are but because of what they would do with the money — use it to further the religious purposes of inculcation and proselytization.”

Naturally, the conservatives asked the U.S. Supreme Court to overrule that decision… and today, that Court agreed to hear the case.

SCOTUSBlog summarizes the stakes by saying the Supreme Court will decide…

… Whether a state violates the religion clauses or equal protection clause of the United States Constitution by prohibiting students participating in an otherwise generally available student-aid program from choosing to use their aid to attend schools that provide religious, or “sectarian,” instruction.

It’s possible, then, that a decision favorable to the Christian schools could apply to other states, not just Maine.

Americans United for Separation of Church and State isn’t thrilled about what could happen. President and CEO Rachel Laser issued this statement:

One of America’s most basic principles is that we can all freely choose our religion, or no religion at all. The separation of church and state is what protects this freedom for all of us. One of the core reasons our country’s founders insisted on church-state separation was to ensure taxpayers are not forced to pay for the private religious education of others. The Supreme Court chipped away at this protection last year when it required states to include religious schools in private school voucher programs. If this court is to maintain any semblance of adhering to the Constitution and the intent of its framers, it should not cross this final line of requiring taxpayers to pay for religious instruction.

Unfortunately, there’s no reason to think the justices will rule the right way. We can expect further erosion of the wall between church and state. It’s only a question of how much the wall will crumble. 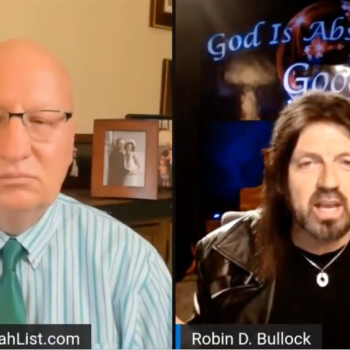 July 2, 2021 Evangelist: The 2008 Democratic Convention Stage Was Modeled on Satan's Throne
Browse Our Archives
What Are Your Thoughts?leave a comment