For the third time in roughly a month, the gravesites of children have been discovered underneath a former “residential school” in Canada.

The nation’s system of residential schools were designed to “replace Indigenous values, beliefs, and understandings of the world with those of the European colonizers.” That meant converting students to Christianity. It was a form of cultural genocide. Many students were believed to be malnourished and abused at these schools. Many were sick. The schools were often unsanitary. Rather than treat the children and help them, they were left for dead. It didn’t end a long time ago, either; the last government-funded residential school in Canada didn’t close until 1996. 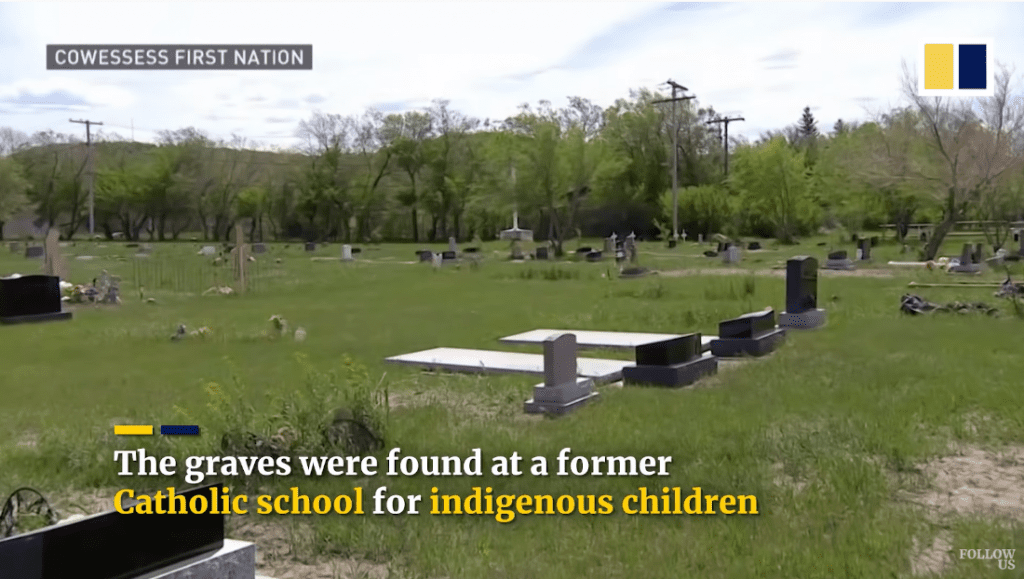 About a month ago, on the grounds of the Kamloops Indian Residential School (in British Columbia), which didn’t close until 1969, the First Nation tribe announced that preliminary radar analysis had uncovered the remains of 215 children who were buried there, some as young as 3.

Last week, we learned about an additional 751 gravesites near the Marieval Indian Residential School in Saskatchewan.

The community of ʔaq’am, one of four bands in the Ktunaxa Nation and located near the city of Cranbrook, B.C., used ground-penetrating radar to search a site close to the former St. Eugene’s Mission School, the Lower Kootenay Band announced Wednesday.

St. Eugene’s Mission School was operated by the Catholic Church from 1912 until 1970. The building has since been converted into a golf resort and casino owned by the Ktunaxa Nation.

The Lower Kootenay Band said up to 100 of its members were forced to attend the institution.

“It is believed that the remains of these 182 souls are from the member bands of the Ktunaxa Nation, neighbouring First Nations communities and the community of ʔaq’am,” read a media release from the band.

It appears to be another “place of horrors.” While it’s hard to discern how many children were victims at this particular site, it seems inevitable that more gravesites will be found.

Remember that these Catholic schools were known for abusing children physically, sexually, and emotionally. Making matters worse, the Catholic institutions that controlled these schools are not fully cooperating with investigations, making it difficult to identify whose bodies may have been buried there. At least 150,000 Indigenous children went to these kinds of schools.

How many more gravesites like this are going to be found before the Catholic Church takes any kinds of responsibility for their cruelty? Pope Francis has explicitly refused to apologize for these schools.

It’s unbelievable that U.S. bishops are debating whether Joe Biden should receive communion due to his support of pro-choice policies while, in Canada, the Church has been implicated in these mass deaths. To pretend like the Catholic Church has any sort of moral high ground when their history is full of bigotry, abuse, and killings is just incredible hypocrisy for an institution that simply can’t be trusted to do the right thing.

July 1, 2021 A Christian “Prophet” Said Trump Would Return to Power by June. Oops.
Browse Our Archives
What Are Your Thoughts?leave a comment