Because last year’s presidential election was during the pandemic, it was much tougher to sort out the preferences of various groups. (Early mail-in votes made exit polling much less reliable.)

At the time, though, based on preliminary data, we knew white evangelical Christians supported Donald Trump roughly as much as they did in 2016. That support may have dipped from 81% to 76%, but the storyline was clear: Those Christians decided that Trump’s bigotry, racism, corruption, and lies were worth it in exchange for constant lip service and a steady stream of conservative judges.

But now the Pew Research Center has come out with a new report based on the voting patterns of “validated voters” — that is, people who said they voted and whose votes were later confirmed by the public record. It’s about as accurate a reflection of what really happened in the election as you’ll find, given that this is all based on the honor system and people telling the truth about who they voted for. 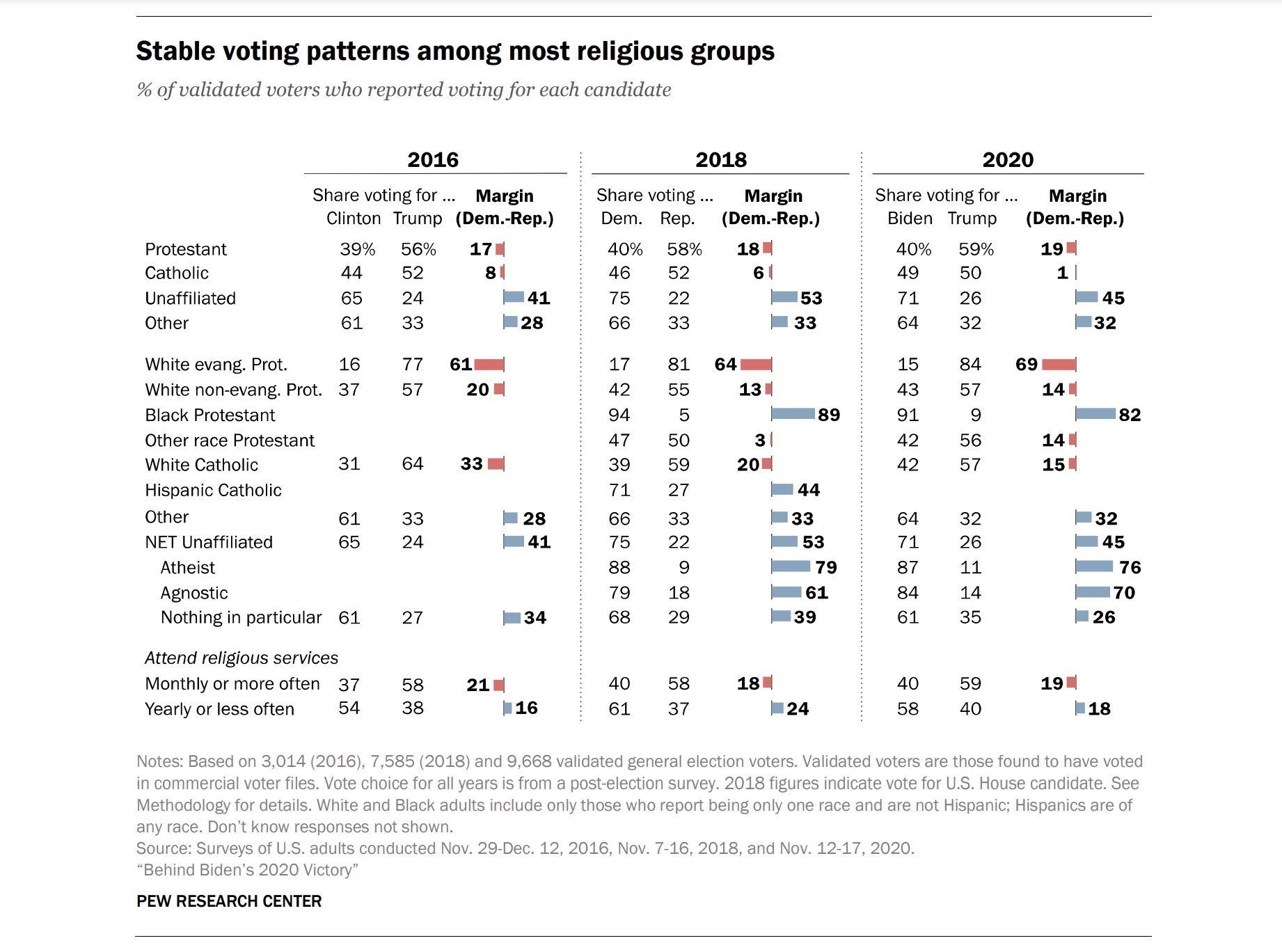 They saw the chaos happening around the country and all the people who were suffering and thought, We love this. Let’s keep rewarding Trump.

Interestingly enough, though, look at the numbers for the non-religious. We know that about 65% of “Unaffiliated” Americans went for Hillary Clinton in 2016, but in 2020, that number for Joe Biden jumped up to 71%… and among just atheists, it was at 87%. (Atheists weren’t specifically tracked in 2016.)

Bottom line: Atheists are more reliable voters for Democrats than white evangelicals are for Republicans.

Holy shit, that last line. I know it’s obvious — without a large chunk of your base, you’re going to get fewer votes, and if Trump lost his white evangelical voters, Biden would’ve beaten him by over 20 points — but I can’t recall even hearing it put that bluntly. Democrats need us. Secular Americans are a reliable base for Democrats no matter how you slice it, yet we’re rarely “courted” by candidates the way Republicans bend over backwards to win those conservative Christian votes. And unlike them, we’re not even asking for special favors! Candidates just need to do their damn job with competence and make sure that public policy is guided by evidence and facts instead of religious dogma. Every Democrat, religious or not, should be able to get on board with that. 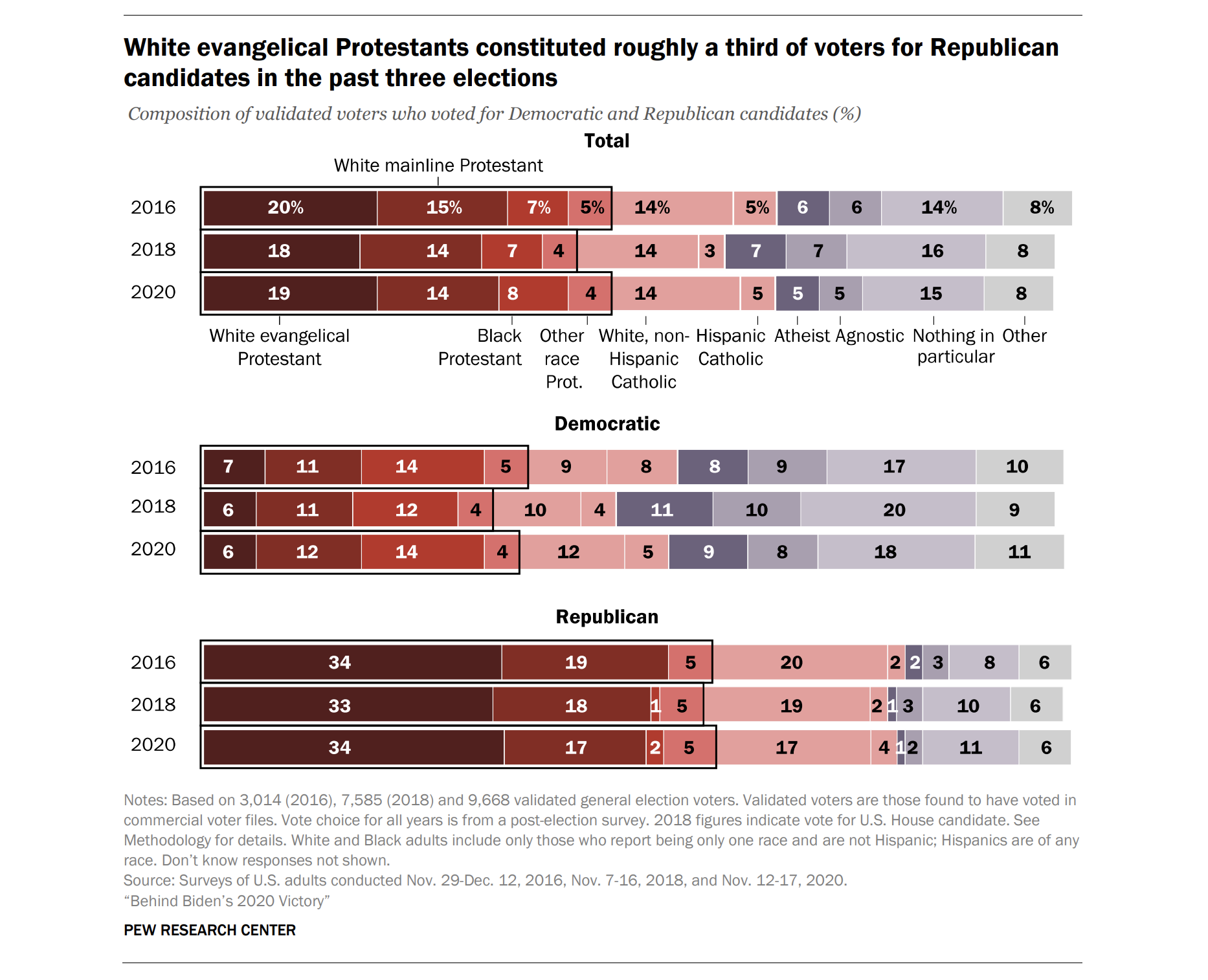 Whether that means Democrats should spend less time trying to appease those white evangelicals or more (because that number could only go up) could be debated. But I would argue it’s much easier to get non-voting Secular Americans to support Democrats than trying to flip some of those non-voting conservative Christians.

I would also point out that this is just one analysis. Other results may vary in specific numbers though the overall trends are similar.

I’ve said this before, but one thing that’s become abundantly clear over the past few years is that all the criticism of conservative Christians that atheists and liberals have been leveling at them for years were exactly right. They are hypocrites. They are cruel. They don’t care about racism. They’re not bothered by injustice. They will never change. They are nothing like the God they claim to worship. And they would want nothing to do with Jesus if He showed up today.

White evangelicals should be ashamed that so many people in their churches wanted another four years of cruelty, corruption, and incompetence. The more decent people in those congregations would be better off leaving their churches and finding a new religious community because whatever benefits they think they’re getting from church aren’t worth the cost to everyone else in the country.

Never let white evangelicals claim the moral high ground over non-religious people. They repeatedly show the world how they can’t be trusted to make the right moral decision even when it’s the simplest one imaginable.

We know what they stand for. They deserve to pay a social and cultural price for it. 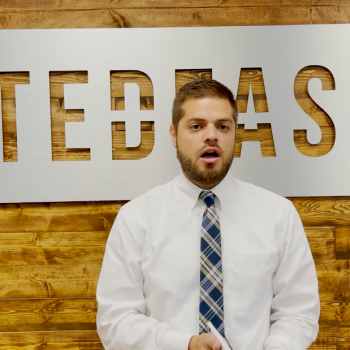 July 1, 2021 TX Court Tosses Lawsuit from Judge Who Refused to Perform Same-Sex Weddings
Browse Our Archives
What Are Your Thoughts?leave a comment