***Update***: YouTube has reinstated Right Wing Watch’s account. But it should not have taken internet outrage to get YouTube to do the right thing — especially when Right Wing Watch had already privately appealed the decision to ban them days ago.

In yet another sign that YouTube’s algorithm is seriously broken, the website banned Right Wing Watch, effectively erasing years of videos keeping tabs on the words and actions of conservative extremists.

Meanwhile, many of the original videos from the extremists remain up on the site.

Kyle Mantyla, senior fellow at Right Wing Watch, posted screenshots this morning of emails he received from YouTube saying it had “found severe or repeated violations of our community guidelines.”

Our efforts to expose the bigoted view and dangerous conspiracy theories spread by right-wing activists has now resulted in @YouTube banning our channel and removing thousands of our videos. We attempted to appeal this decision, and YouTube rejected it. pic.twitter.com/74Rfi31uQe

But Right Wing Watch doesn’t post original content on that channel; it posts clips from pastors and political figures saying outlandish things during speeches and interviews that many other people aren’t watching. In other words, Right Wing Watch is being punished for the actions of the very extremists they’re working to expose. YouTube’s algorithm appears to be punishing them for promoting hate speech, not realizing the intent behind sharing those clips, while letting the original hate speech exist in context of a sermon or interview.

There are other outlets, including Twitter and Vimeo, where those video clips can be posted, but there are thousands of videos that Right Wing Watch posted on YouTube over several years which are currently inaccessible to the public. That’s a victory for the extremists whose awful rhetoric can now go down a memory hole.

All of this happened, by the way, even as Right Wing Watch avoided posting anything on its YouTube channel precisely to avoid this action, as reported by Justin Baragona of The Daily Beast.

Mantyla said that YouTube recently gave the RWW channel — which has roughly 60,000 subscribers — two strikes in April over videos it posted, prompting the watchdog to refrain from posting more content to the site until the strikes dropped off after 90 days. (Right Wing Watch had largely relied on rival platform Vimeo to host its videos in the meantime.)

“And then they found some video from eight years ago, that they flagged, took that down, and that was our third strike,” he explained. “And they took down our entire account.”

According to Mantyla, the third strike occurred last week and the channel was taken down at that point. Notification that their appeal was rejected, however, wasn’t sent until early Monday morning, when Right Wing Watch went public about the ban.

How is it possible for a company as big as YouTube to have no one in a position of power to prevent something like this from happening? This isn’t a small channel and it’s certainly not a small problem. The inability to distinguish hate speech from people trying to expose that hate speech shouldn’t be this difficult to discern. This isn’t the first time hate speech has been allowed to thrive either.

Whose side is YouTube on? When will someone from the company step in to fix the problem they created in this instance? 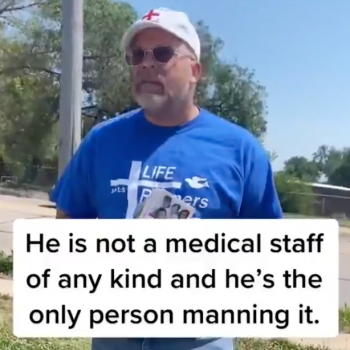