Two years ago, the Supreme Court ruled that the Bladensburg Peace Cross in Maryland was constitutional — and not an illegal endorsement of Christianity — using the argument that it was so old that people no longer treated it as a Christian symbol.

I repeat: They said this wasn’t a Christian symbol.

Since it’s no longer a Christian monument, though, that kind of means it’s up for grabs.

And The Satanic Temple is calling dibs on it.

Join us July 10 for the Bladensburg Satanic Peace Cross Ceremony!

The group says that, in two weeks, they’re going to take symbolic control over the monument and rename it “The Bladensburg Satanic Peace Cross.” They will host a (livestreamed) ritual there on July 10 to honor all Satanist war veterans.

… Delivering the decision, Justice Alito wrote that “The Bladensburg Cross has come to represent… a place for the community to gather and honor all veterans and their sacrifices for this Nation…” As the Supreme court has essentially ruled that a 40-foot tall cross on public property is considered a monument that represents all faiths, TST takes this to mean that the Supreme Court is inviting TST to memorialize Satanist veterans through this “community” based monument.

Deciding that the Bladensburg Cross does not just represent Christians, but people of all faiths including Satanists, is a kind of blasphemy that is consistent with Satanism. As a symbol for all veterans, the Cross represents Satanist veterans who we are honoring in our ceremony. The Satanic Temple will refer to the memorial as the Bladensburg Satanic Peace Cross. We expect the celebration of this Satanic icon will be a recurring event, and we encourage Satanists everywhere to make pilgrimages to Bladensburg. Outside of Salem, MA, we expect Bladensburg will become known internationally as a destination for Satanists.

… consistent with the Supreme Court ruling, Bladensburg, MD, is the first city to actually have a Satanic monument on state property.

Last night, The Satanic Temple’s spokesperson Lucien Greaves issued this statement about the planned event and why they chose this particular monument:

It is important to note that our acceptance of the Satanization of the Bladensburg Cross is a narrow ruling on the part of The Satanic Temple in response to the unique circumstances surrounding this particular monument and is not a blanket acceptance of religious monuments which indicate one particular viewpoint disingenuously said to convey a secular, inclusive message.

To put it bluntly, we find it rather bizarre and somewhat hilarious that theocratic activists hailed a ruling allowing the cross to stand, even as that ruling explicitly stripped the cross of any religious context, robbed it of sacred purpose, and imbued it with mixed religious meaning, which is surely nothing short of blasphemy to any serious practitioners of the Christian faith.

So go ahead and celebrate that the cross remains on public grounds blissfully ignorant to what you have lost. As Satanism is a religion that truly values pluralism and inclusiveness, the codified and judicially affirmed redefinition of the Bladensburg Cross in particular makes it more Satanic than Christian.

The best part about this is that there really isn’t anything people can do about it. It’s public space. The name-change is informal. No one is forced to participate. It may be “A+ level trolling,” but it also gives Satanists a way to reclaim a stand-alone Christian monument that shouldn’t exist on public property.

If the public goes along with it, even better. 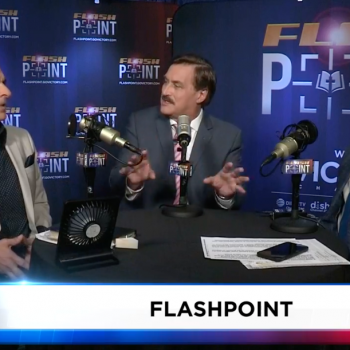 June 25, 2021
Preacher: Mike Lindell Was "Sent From Heaven" to Help Overturn the Election
Next Post

June 26, 2021 Christian Singer Tries to Erase All Traces of His Awful “Modest is Hottest” Song
Browse Our Archives
What Are Your Thoughts?leave a comment