Christian hate-peddler Tony Perkins of the Family Research Council, who admitted last month that Christian warriors were “trying to take over the world,” is now offering life tips to Christians on how to survive Pride Month.

Because this month is really all about those poor persecuted Christians…

In addition to his tips, though, he complained about why they were needed at all:

“How did we get to the point where celebrating sex and transgenderism became a 30-day event that rivals Christmas?” he continued. “We have a president who’s flying the rainbow flag above the U.S. flag at our embassies, a Democratic Congress that thinks the military should salute pride on base, and a White House that brags [that] almost 1 percent of its 1,500 appointees are LGBT. You can’t blame people for wondering: When did we become identified by our sexual proclivities? The world is upside down when American pride is something we should apologize, for but sexual perversion is the stuff of parades. Just a few decades ago, these activists said all they wanted was recognition, autonomy, coexistence. Now, a handful of years after Obergefell, it’s not enough to leave them alone with their choices; they demand validation, affirmation, celebration. Pride is the new religion, and everyone must bow a knee to their sexual gods or face the left’s fiery furnace.”

Apparently celebrating your humanity, and love, and tolerance amounts to perversion for Christian zealots like Perkins who has no awareness of what Christians like him have put LGBTQ people through for decades. (Then again, Perkins solicited the help of David Duke during a political campaign he managed and spoke to a white supremacist group years later. He has a habit of claiming to be persecuted while working hand-in-hand with the persecutors.)

It’s also ironic that a professing Christians would whine about another group condemning him to eternal hellfire when that’s literally what his own religion teaches. And Perkins, who once employed child molester Josh Duggar, has no business complaining about anyone else’s “sexual perversion,” especially when it’s consensual.

But he’s also just plain wrong. No one cares if he personally accepts LGBTQ people. He can be a bigot or belong to a white supremacist church or whatever it is he and other Republicans do in their free time. We just want him and conservative Christians like him to stay the hell out of everyone’s way instead of trying to block civil rights legislation.

June 15, 2021
The Lobster Diver Swallowed By a Whale Disproves the Biblical Jonah Myth
Next Post 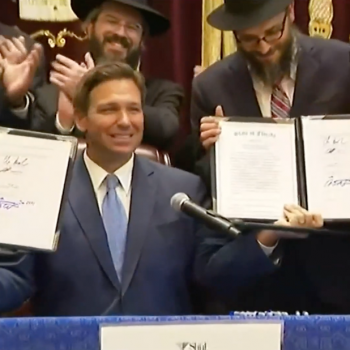 June 16, 2021 Florida Will Now Force Kids to Observe a 1-Minute "Moment of Silence" in School
Browse Our Archives
What Are Your Thoughts?leave a comment