As you may have heard by now, on Friday, diver Michael Packard was hoping to catch lobsters off the coast of Cape Cod in Massachusetts… but things took a wild turn when he reached the bottom of the ocean.

He was swallowed by a whale.

“I was completely inside; it was completely black,” Packard said. “I thought to myself, ‘there’s no way I’m getting out of here. I’m done, I’m dead.’ All I could think of was my boys — they’re 12 and 15 years old.”

He started flailing around. It irritated the whale enough that it soon spat him out. Packard estimated he was inside the whale’s body for about 30 to 40 seconds. He’s recovering from soft tissue damage and plans to keep on diving once he’s fully recovered.

That whole incident — traumatic for him and hilarious for the internet — thankfully didn’t end in tragedy. But it led to a lot of people making comparisons to the biblical story of Jonah… who was supposedly swallowed by a whale (or a “giant fish”) for three days and three nights until he was eventually spit out.

Christian Twitter, of course, is having a field day with the story. A lot of people are suggesting this is a perfect way to introduce Jonah in church — or at least it’s a perfect illustration of the story.

They fail to realize that Packard’s story does more to damage that myth than anything else.

Packard survived, yes, but he was only in the whale’s body for less than a minute. Jonah’s three-day vacation, as biblical literalists would have you believe, is all the more unbelievable given Packard’s experience.

Packard isn’t a modern-day Jonah any more than Ken Ham‘s boat is a modern-day Noah’s Ark. There are so many flaws with the analogies that they unintentionally disprove the idea that anyone should take the Bible literally. 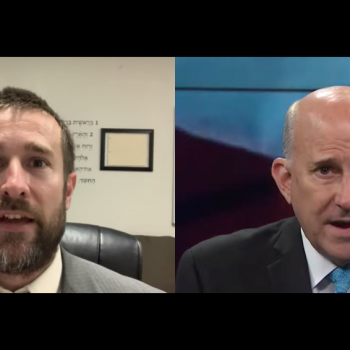