Klingenschmitt: Biden is Letting the Antichrist “Take Over Our Military” June 12, 2021 Beth Stoneburner

Klingenschmitt: Biden is Letting the Antichrist “Take Over Our Military”

Did you know that President Joe Biden is actively punishing Christians in the military in order to help the Antichrist?

But conservative activist and former Colorado state legislator Gordon Klingenschmitt has the scoop!

Religious-right activist Gordon Klingenschmitt warns that the Biden administration is actively recruiting lesbians into the military because "they want a demonic military" to help the Antichrist "rise and take over the world." pic.twitter.com/fknsFwhki7

When I discern the spirits behind what the Biden administration are doing, they’re doing the opposite. They don’t want a holy military, they want a demonic military. And what’s the end goal of that?… Not only are they welcoming… that kind of behavior, but they’re now punishing Christians…

They are purging the Christians! And that demonic spirit of Antichrist is coming in to take over our military, ultimately, for one reason: That when the Devil controls the American military, the Antichrist can rise and take over the world.

He refers to a chaplain, Maj. Andrew Calvert, who was reprimanded for claiming on social media that transgender troops are “mentally unfit” to serve. Reprimanding him was the right move! He violated the Army’s own rules against discrimination. Punishing him for breaking the rules isn’t Christian persecution. If he wants to discriminate, he’ll have to do it on his own time, not while using his official chaplain Facebook page to comment on an article posted on the Army Times‘ Facebook page.

Klingenschmitt thinks his beliefs deserve special treatment. They don’t. The military depends on cohesion and religious neutrality. That includes people of all faiths and no religious faith, as well as LGBTQ soldiers. To suggest that promoting inclusion, for the sake of a larger goal, amounts to siding with the Devil, is bad patriotism as well as bad theology. 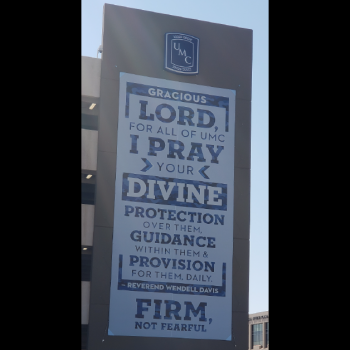 June 12, 2021 Texas Public Hospital Will Take Down Pro-Religion Banner at Urging of Atheists
Browse Our Archives
What Are Your Thoughts?leave a comment