Where do you turn when you’re craving a juicy, bigotry-free chicken sandwich on a Sunday? Burger King, apparently.

during #pride month (even on Sundays �) your chicken sandwich craving can do good! we are making a donation* to @HRC for every Ch'King sold �️‍�

The restaurant chain tweeted that it would donate 40 cents to the Human Rights Campaign for every Ch’King chicken sandwich sold during Pride Month, while (almost) literally side-eyeing Chick-fil-A by adding “even on Sundays” when that chain is famously closed. This follows last week’s news that Chick-fil-A’s billionaire owner Dan Cathy is, in his personal capacity, donating to a Christian group seeking to strip LGBTQ Americans of their rights, even after the restaurant’s non-profit arm promised to stop doing something similar in recent years. That means a portion of any food bought at Chick-fil-A funds bigotry, albeit in a very roundabout way.

After renewed calls were made over social media to boycott Chick-fil-A, Burger King took it as an opportunity to show its solidarity with the LGBTQ community.

“This is a community we love dearly and have proudly supported over the years, so we couldn’t miss an opportunity to take action and help shine a light on the important conversation happening,” a Burger King spokesperson said in an email statement to USA TODAY.

That’s one way to market a new product while generating goodwill all around.

As usual, there was no shortage of outrage from conservative commentators. One conservative activist denounced these “homosexual chicken sandwiches” while calling for a BK boycott. Meanwhile, the Daily Wire decried the tweet and donations as forms of persecution:

[The National Christian Charitable Foundation] opposes the Equality Act, which would expand the Civil Rights Act to include protections for the LGBT community at the expense of religious liberty.

In other words, the Equality Act protects civil rights instead of allowing Christian business owners the ability to discriminate against gay customers.

The gist of that article is that Burger King doesn’t deserve praise. That may be true but for a different reason: With all the obstacles LGBTQ folks have to deal with, Burger King’s donation — limited to $250,000 total — isn’t much for a global chain. This tweet and the donation are part of a marketing campaign, not some unprompted gesture. That doesn’t mean it’s unwanted. In fact, it’s kind of nice to know that they believe promoting LGBTQ inclusion is better for their company than avoiding the subject entirely. But this is a business strategy to sell a new product. Don’t forget that.

It’s also arguably hollow — a kind of performative activism. It comes from a chain that got plenty of (deserved) criticism months ago for making a sexist joke to promote a scholarship program that ultimately helped a grand total of two women. This more recent gesture is no doubt appreciated, but it’d be foolish to give a company more credit than it deserves for a well-played strategy that generates plenty of positive press.

Anyway, the ball’s in Chick-fil-A’s court. For a company synonymous with anti-LGBTQ bigotry, they’re not even bothering with performative gestures to support Pride month right now. 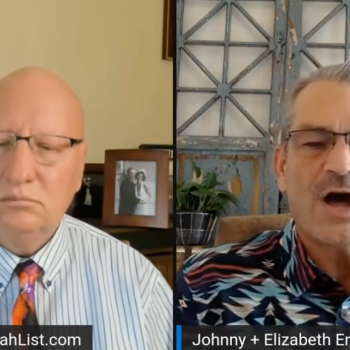 June 8, 2021
Christian Conspiracist: Supporting Trump is a Way to Prove Your Devotion to God
Next Post