A week after the mayor of Shreveport, Louisiana decided two days of prayer, led by city council members, would stop local violence — it didn’t work — the Republican governor of Utah has decided to take the same useless approach to deal with a drought.

“I’ve already asked all Utahns to conserve water by avoiding long showers, fixing leaky faucets, and planting waterwise landscapes. But I fear those efforts alone won’t be enough to protect us,” Cox said in a recorded message released Thursday. “We need more rain, and we need it now.”

Cox is declaring a “weekend of prayer” from Friday through Sunday in hopes that the clouds will open to replenish depleted reservoirs and bring moisture to a parched landscape.

“Prayer is powerful,” Cox’s declaration states. “And I encourage all Utahns, regardless of religious affiliation, to join together on this weekend of prayer.”

Who wants to tell him that clouds don’t care what God anyone prays to? Or that it could be argued the current drought is part of God’s Plan? Or that asking non-Christians to join him in what’s effectively a Christian prayer is downright insulting?

Maybe these people would understand it better if a non-religious governor asked everyone in the state to hold off on praying for a weekend since God’s not listening.

None of this is to downplay the seriousness of the drought; it’s to criticize religious pandering that will accomplish nothing. It comes from the same Republican Party that downplays or rejects the science of climate change.

By the way, Cox’s predecessor in office made the exact same kind of appeal to God in 2018, hoping to offset dry weather conditions. It failed. Georgia Governor Sonny Perdue did the same thing in 2007. That also failed.

In 2011, then-Texas Governor Rick Perry made the same appeal to God for rain. There was no major rainfall for another four months… and when that finally happened, guess what? FOX News credited the prayers.

The sad thing is that it’ll eventually rain in Utah. When that happens, there will be some delusional people who think it’s God answering their prayers instead of weather patterns. For a Republican governor, this is a win-win: He gets credit from religious people for appealing to God and none of the blame when this tactic fails because “God works in mysterious ways.”

The same politicians who only offer thoughts and prayers after mass shootings should know better than anyone that these appeals accomplish nothing. But when you represent a party that only exists to get in the way of that never offers no solutions, what else can anyone expect?

June 3, 2021
Please Support the Work I Do Through This Site
Next Post 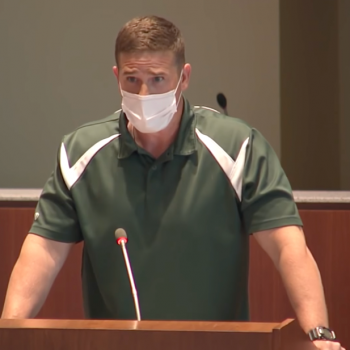 June 4, 2021 Teacher Who Said Using Trans Kids' Pronouns Would "Defile" God Sues District
Browse Our Archives
What Are Your Thoughts?leave a comment