Byron Tanner Cross is a right-wing Christian who was recently suspended from his job as a gym teacher at Leesburg Elementary School in Virginia because he refused to acknowledge the existence of hypothetical trans people.

The Loudoun County School Board recently decided to expand LGBTQ rights in a way that would call for staffers to use trans students’ pronouns. Cross decided he couldn’t do that — respect students, that is — and said as much at a school board meeting:

… We condemn school policies like 8040 and 8035 because it will damage children, defile the holy image of God. I love all of my students, but I will never lie to them regardless of the consequences. I’m a teacher but I serve God first. And I will not affirm that a biological boy can be a girl and vice versa because it is against my religion. It’s lying to a child. It’s abuse to a child. And it’s sinning against our God.

It’s completely irrelevant that Cross has a faith-based reason to belittle trans kids. If you can’t respect your students, you have no business being a teacher. His bigotry may be welcome in his church, but public schools have a responsibility to be an inclusive space where students are safe. Cross made it clear that he will not treat trans kids like other students. He will condemn their identities to the point where he tells them their existence is a lie.

When you brag about that in advance, the school district has every right — indeed, a responsibility — to punish you for it.

That’s what they did. He was called into a meeting after multiple parents asked that he have “no contact with their children because of his comments.”

Now Cross is suing the district:

Cross’s lawsuit is framed as a case which “is not about how schools should treat students who struggle with gender dysphoria.”

Rather, “[i]t is about whether public schools can punish a teacher for objecting, as a private citizen, to a proposed policy, in a forum designed for the purpose of considering whether to implement such policies, where the policy would force him to express ideas about human nature, unrelated to the school’s curriculum, that he believes are false,” the lawsuit says.

He’s not merely objecting to a policy, though. He’s openly stating that he’s going to discriminate against trans children, treating them differently from other kids whose pronouns he doesn’t have a problem with. The school district shouldn’t have to wait for him to bully a child before taking action when he declares his intentions in advance. Especially when the district’s policies are in line with state law. (The district’s new policies also say trans kids can participate in sports; the state has no position on this.)

For now, Cross is on administrative leave with pay. He hasn’t been fired. But make no mistake: the issue isn’t his faith. It’s his bigotry. There are plenty of Christian teachers who are excellent. There are plenty of Christian teachers who may disagree with district policies on LGBTQ issues. But they chose to work in a public school district and they’re obligated to follow the school’s rules.

Cross thinks being a Christian gives him the right to bully trans kids. It’s no wonder that Alliance Defending Freedom, the right-wing group that constantly defends hate in the name of Jesus, is representing Cross here. It’s also no surprise that Cross and his wife attend Cornerstone Chapel, a bigot-friendly megachurch whose pastor Gary Hamrick used his platform on Sunday to denounce the school board for caring about students, racism, and comprehensive sex education:

“The school board — some of them, not all — some of them are not doing their duty to protect, let alone educate our children,” Hamrick told congregants. “And they are subjecting them to sexually explicit materials… and they are already talking about introducing racially divisive curriculum, they are emotionally abusing our children by perpetuating the lie about gender confusion when they affirm pronouns that are contrary to biology, reality, and the beautiful design of God. So, they need to be held accountable and it’s time to step up.“

The school board is “emotionally abusing our children” by being tolerant, said the pastor who teaches people that they’ll be tortured for eternity unless they share his supernatural beliefs.

No one’s asking Cross to accept or even care about trans people. All he has to do here is call them by their names and pronouns, just as he does his other students. He’s refusing to do it. A guy named Byron, who goes by “Tanner,” doesn’t want to accept that other people may not want to go by the name that’s printed on their birth certificate.

He’s a despicable human being who thinks being Christian should give him ample cover to treat students like shit. That’s why he has no business working in a public school. If he hates people this much, let the church hire him. 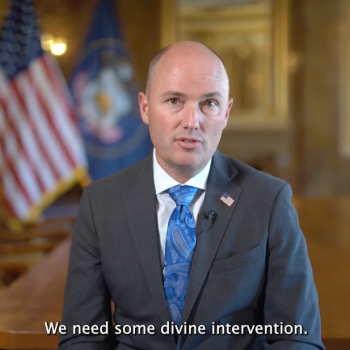 June 4, 2021
Utah's Governor Thinks a Statewide "Weekend of Prayer" Will Lead to Rainfall
Next Post 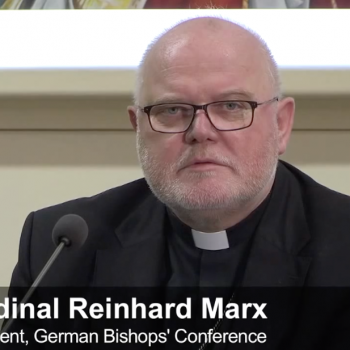 June 4, 2021 German Cardinal Offers to Resign Over Catholic Church's Sex Abuse Failures
Browse Our Archives
What Are Your Thoughts?leave a comment