By now, you’ve probably heard about the Nashville company hatWRKS that sold “gold stars” reading “Not Vaccinated,” clearly attempting to draw a connection between COVID vaccines and what Jews were forced to wear in Nazi Germany. 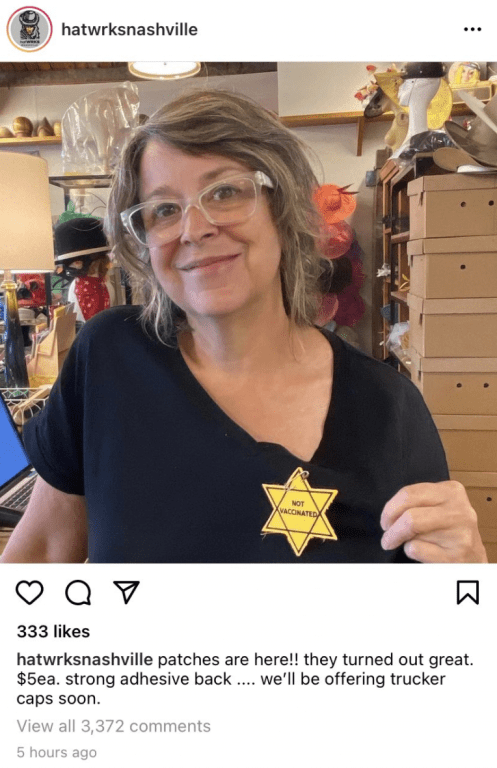 That soon led Stetson, the apparel company that sold products to hatWRKS, to announce they would no longer be doing business with Gaskins. They weren’t alone. Between protests and public backlash online, the company soon apologized for being “insensitive.”

You can tell from the wording there, however, that the “apology” is really anything but:

“in NO WAY did i intend to trivialize the Star of David or disrespect what happened to millions of people,” hatWRKS said in its statement Saturday. “that is not who i am & what i stand for. … i sincerely apologize for any insensitivity.”

[Shop owner] Gigi Gaskins initially pushed back on the fierce condemnation she received in response to the patches. The store posted statements to Instagram on Friday that defended the merchandise and compared the U.S. government’s push to get people vaccinated against COVID-19 to “fascism.”

She’s not sorry for using a symbol that Jews were forced to wear during the Holocaust to describe her own “victimhood.” Only for the way everyone reacted to it…

It doesn’t help that there’s also evidence that the store owner participated in the insurrection attempt on January 6, making it that much harder to take her apology seriously.

Nor does it help that after posting that “apology,” she posted a follow-up defending her actions. (“… was the use of the yellow star an insensitivity? obviously so to many, but does that make me an anti-semite nazi? NO, NO IT DOESN’T.”) She also describes herself as being a “target of a mob” in that same post.

As misguided as you have to be to think the plight of being an anti-science conservative in the United States is in any way comparable to being a European Jew in the 1930s and 40s, it takes a true level of stupidity to think you could sell merchandise belittling the Holocaust and not expect backlash to your business. Maybe seeing her business shutter will prompt the self-reflection she desperately needs.

There are inevitably going to be people who call this a form of “cancel culture,” but it’s really just a business owner facing consequences for her own ignorant actions. She brought this upon herself. She has no one else to blame.

June 2, 2021 Alleged Whitmer Kidnapper Doesn't Want Anyone Hearing Him Say God Gave the OK
Browse Our Archives
What Are Your Thoughts?leave a comment