Tony Perkins Admits That Lawmakers Overestimate the Influence of Pastors May 31, 2021 Hemant Mehta

Tony Perkins Admits That Lawmakers Overestimate the Influence of Pastors

This is an interesting and inadvertent admission from Christian hate-peddler Tony Perkins of the Family Research Council.

During a recent panel discussion on his “Watchmen on the Wall” gathering, Perkins said that the influence of right-wing pastors is overinflated by politicians — and Christians ought to take advantage of it.

… Church and pastors in particular actually have a greater influence than they realize when they speak out on these issues… and especially those who don’t attend church so much — legislators — they’re fearful of pastors speaking out on these issues.

I’ve never heard a Christian Nationalist accidentally admit that pastors aren’t actually that influential, but if politicians think otherwise, then pastors should take advantage of them to advance a right-wing Christian agenda.

If it matters, I think he’s wrong about most politicians being “outside the church.” Most are in those bubbles and know exactly how influential pastors can be. But they also know that vocal extremists can and have alienated quieter majorities. The more conservative Christian pastors use their power to promote bigotry — it’s not like they ever get all that worked up to help the poor — the more it could backfire for those politicians… and Christianity as a whole. 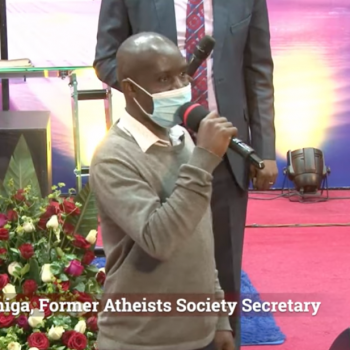 May 31, 2021
An Atheist Group in Kenya Says One of Its Leaders Converted to Christianity
Next Post

June 1, 2021 Pastor Mark Driscoll is More Abusive Than Ever, According to Church Staffers
Browse Our Archives
What Are Your Thoughts?leave a comment